Earlier today, in the course of linking to a Ryan Cooper post about Bernie Sanders, I mentioned that I thought Cooper was “very, very wrong about the history 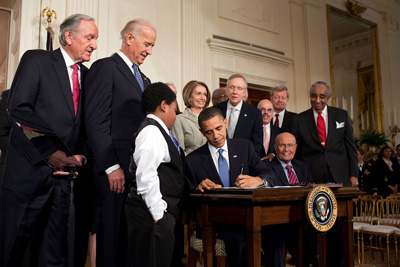 of health care reform too, but I’ll leave that for another time.” Well, why not now? Here is Cooper:

Democrats as a party were not “working their fingers to the bone” trying to get universal health care through this entire time [i.e., since 1993]. For two whole presidential elections the party’s nominees ran on measly little half-measures they barely mentioned….ObamaCare — a basically mediocre program that is still a big improvement on the status quo — reflects its political origins. It’s what milquetoast liberals had settled on as a reasonable compromise, so when George Bush handed them a great big majority on a silver platter, that’s what we got. It was Bush’s failed presidency, not 30 years of preemptively selling out to the medical industry, that got the job done.

That’s pretty brutal. But let’s go back a little further. Here’s a very brief history of health care reform over the past half century:

1962: JFK launches effort to provide health care for the elderly. It is relentlessly attacked as socialized medicine and Kennedy is unable to get it passed before he dies.

1965: Following a landslide victory, and with massive majorities in both the House and Senate, LBJ passes Medicare and Medicaid.

1971: Richard Nixon proposes a limited health care reform act. Three years later he proposes a more comprehensive plan similar in scope to Obamacare. Sen. Ted Kennedy holds out for single-payer and ends up getting nothing. “That was the best deal we were going to get,” Kennedy admitted later, calling his refusal to compromise his biggest regret in public life. “Nothing since has come close.”

1979: Jimmy Carter proposes a national health care plan. The Senate takes it up, but Carter is unable to broker a compromise with Kennedy, who wants something more ambitious.

1993: Bill Clinton tries to pass health care reform. He does not have a gigantic majority in Congress, and fails miserably. Two years later Newt Gingrich takes over the House.

2009: Barack Obama gets a razor-thin Democratic majority for a few months and eventually passes Obamacare, which expands Medicaid for the poor and offers exchange-based private insurance for the near-poor.

This is what politics looks like. Every single Democratic president in my lifetime has tried to pass health care reform. Some of them partially succeeded and some failed entirely, but all of them tried. The two main things standing in the way of getting more have been (a) Republicans and (b) liberals who refused to compromise on single-payer.

Contra Cooper, George Bush did not hand Obama a “great big majority.” Democrats in 2009 had a big majority in the House and a zero-vote majority in the Senate. That’s the thinnest possible majority you can have, and this is the reason Obamacare is so limited. To pass, it had to satisfy the 40th most conservative senator, so that’s what it did.

There’s been a long and ultimately sterile argument over whether Obama could have gotten more. I think the evidence suggests he got as much as he could, but the truth is that we’ll never know for sure. And it doesn’t change the bigger picture anyway: thousands of Democrats—politicians, activists, think tankers, and more—have literally spent decades working their fingers to the bone creating plan after plan; selling these plans to the public; and trying dozens of different ways to somehow push health care reform through Congress. For most of that time it’s been a hard, grinding, thankless task, and we still don’t have what we ultimately want. But in the end, all of these hacks and wonks have made a difference and helped tens of millions of people. They deserve our respect, not a bit of casually tossed off disparagement just because they didn’t propose single-payer health care as their #1 priority every single year of their lives.