Is the Republican Party/Movement Conservatism responsible for the rise of Donald Trump? Megan McArdle rounds up five theories about how Republicans brought Trump on themselves and concludes that they don’t make sense. It turns out that four of her theories seem pretty marginal to me, so instead I’m going to offer three of my own. Here we go:

#1: Talk radio and Fox News made conservatives crazy. This is McArdle’s Theory #1, and it’s the only one on her list that I hear frequently—and agree with. But she doesn’t: “Media follows its audience, rather than leading it. Opinion columnists 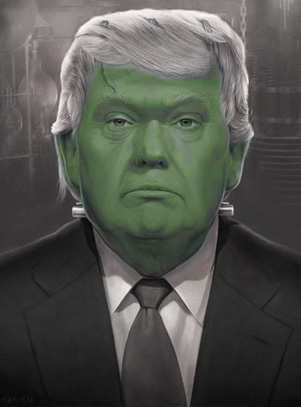 who spend any time at all interacting with their readers are well aware of how pitifully rarely we manage to change anyone’s mind about anything.”

I feel her pain. But Rush Limbaugh is in a whole different universe from Megan McArdle and Kevin Drum. Obviously his popularity owes much to the fact that he channels his listeners’ views, but he’s also influenced them over the years. It was (and is) very much a vicious/virtuous circle: Limbaugh and his audience basically egg each other on. His influence on his listeners is why he was made an “honorary member” of the congressional class of 1994. I don’t know what the official political science view is about this, but Republicans at the time sure thought that Limbaugh was instrumental in stoking the anger that led to the Gingrich revolution—and I agree with them.

Beyond that, common sense suggests that the Rush/Fox/Drudge axis has had a big influence on the conservative movement. It’s created a take-no-prisoners style of conservatism that disdains facts, encourages conspiracy theories, creates secret enemies around every corner, rails against compromise of any kind, and insists that conservatives could win if only their leaders were strong enough. This became fertile ground for someone like Donald Trump.

#2: Tolerance of racism. Are leading Republicans racist? How should I know? But honestly, it doesn’t matter. What matters is that they’ve been plainly tolerant of racism and xenophobia in their ranks because it’s politically convenient. Now along comes someone like Trump, who all but wears his racism on his sleeve, and they’re shocked, shocked, that much of the Republican base is swooning over him. But what did they expect? We’ve been through years of attacks on “urban” welfare recipients. Years of opposition to affirmative action policies that affect only a tiny fraction of the population. Years of attacks on political correctness that are barely concealed gripes about not being able to tell off-color jokes anymore. Years of race-baiting from Fox News. Years of pandering to angry white males. Years of racially inflected attacks on Barack Obama.

Is it merely an amazing coincidence that all this stuff and more is really principled conservatism that just happens to code as racist? Spare me. Republicans let this stuff fester because it helped them keep their base enraged, and now Donald Trump has reaped the benefits.

#3: The hack gap. I don’t imagine I’ll persuade McArdle of this, but conservatives really do have an intellectual superstructure that exists almost solely to provide backup for conservative beliefs. Obviously there are liberals who play this role too, but there are also plenty of mainstream lefties who routinely try to keep things real. Hell, we even have a name for them: “Even the New Republic” liberals. These are the folks that Bernie Sanders supporters deride as sellouts and shills, and there’s really hardly anything comparable on the right anymore. You can find occasional pushback against conservative dogma from, say, libertarians, but they have little influence among mainstream conservatives. In the heart of the movement, it’s a considerable surprise if you ever find a think tank or magazine article warning that facts on the ground don’t really support some beloved tenet of conservatism. I believe that McArdle herself has been a victim of this.

This has created an electorate that doesn’t really care about facts anymore—or, at least, is convinced that they aren’t worth worrying about since the facts are so plainly on their side. So along comes Donald Trump, the ultimate fact-free salesman, and it should be no surprise that the Republican base is fine with this. They’ve been trained for decades not to be concerned about trivia like telling the truth. If Trump says it, they’re willing to believe it. Why wouldn’t they?

So that’s that. Republicans created a field that turned out to be fertile ground for someone like Donald Trump, and guess what? They got someone like Donald Trump. Now they’re troubled because Trump has his own agenda—which, it turns out, the Republican base likes better than theirs—but it’s too late. The only thing left to do at this point is to work for Trump’s defeat and then spend some time rethinking their larger strategy. We’ll see how that goes.