A couple of months ago Ars Technica ran a story about one of Donald Trump’s penny-ante moneymakers from the aughts: the Trump Institute. It all started when a pair of journalism grad students, Joe Mullin and Jonathan Kaminsky, became 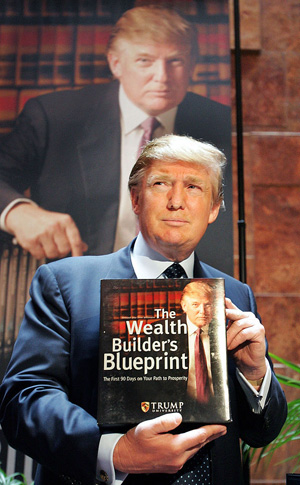 fixated on a late-night infomercial for the National Grant Conferences:

Why did the NGC infomercial captivate us?…It wasn’t the enthusiastic couple who founded NGC, Mike and Irene Milin, proclaiming that numerous government grants were there for the taking. No, we couldn’t stop watching because NGC just felt so sleazy.

….Intrigued, we spent the better part of a year researching NGC, its claims, and its founders’ pasts. We ultimately found that NGC—with several seminar teams circling the country and clearing tens of millions of dollars each year in sales—and its memberships produced no money for any of the customers we interviewed.

….Trump wanted a piece of the action, so he struck a licensing deal with the Milins in 2006. The couple created the “Trump Institute,” using much of the same pitch material and some of the same pitchmen.

Today the New York Times picks up on the story:

As with Trump University, the Trump Institute promised falsely that its teachers would be handpicked by Mr. Trump. Mr. Trump did little, interviews show, besides appear in an infomercial — one that promised customers access to his vast accumulated knowledge. “I put all of my concepts that have worked so well for me, new and old, into our seminar,” he said in the 2005 video, adding, “I’m teaching what I’ve learned.”

Reality fell far short. In fact…extensive portions of the materials that students received after forking over their seminar fees, supposedly containing Mr. Trump’s special wisdom, had been plagiarized from an obscure real estate manual published a decade earlier.

Together, the exaggerated claims about his own role, the checkered pasts of the people with whom he went into business and the theft of intellectual property at the venture’s heart all illustrate the fiction underpinning so many of Mr. Trump’s licensing businesses: Putting his name on products and services — and collecting fees — was often where his actual involvement began and ended.

….Asked about the plagiarism, which was discovered by the Democratic “super PAC” American Bridge, the editor of the Trump Institute publication, Susan G. Parker, denied responsibility….Ms. Parker, a lawyer and legal writer in Briarcliff Manor, N.Y., said that far from being handpicked by Mr. Trump, she had been hired to write the book after responding to a Craigslist ad. She said she never spoke to Mr. Trump, let alone received guidance from him on what to write. She said she drew on her own knowledge of real estate and a speed-reading of Mr. Trump’s books.

In a nutshell, Trump sought out a couple of late-night hustlers who had already been in trouble with the law, taped an infomercial for them, and then pocketed the licensing fee. (They were the “best in the business,” said the Trump executive who brokered the deal.) Later, having learned the hustle, Trump ended his contract with the Milins and opened up Trump University. He had learned all he needed and was ready to start pushing the hard-sell conference business on his own. Seven years later, he’s perfected the hustle even further, so now he’s running for president. You’re welcome.