A lot of Americans don’t have retirement savings. Even if they’ve got an account set up, they just don’t have enough money at the end of the month to save as much as they’d like because they’re just barely paying the bills. Fewer and fewer people have pensions they can really count on, which is why Social Security is more important than ever.

We can’t afford to weaken Social Security. We should be strengthening Social Security. And not only do we need to strengthen its long-term health, it’s time we finally made Social Security more generous, and increased its benefits so that today’s retirees and future generations get the dignified retirement that they’ve earned. 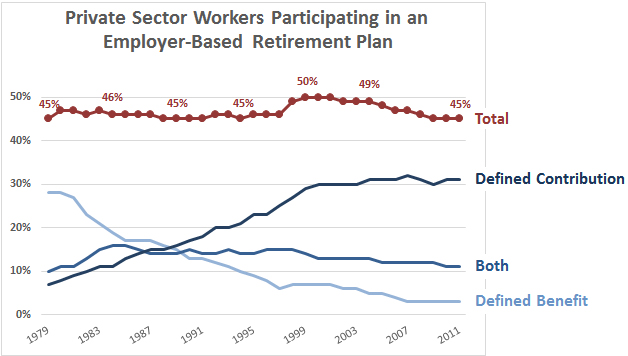 The total share of workers in pension plans of one kind or another was 45 percent in 1979 and 45 percent in 2011. There’s been virtually no change over the past 30 years.

But wait! Those old-style pensions were more generous. Surely that’s what Obama meant by pensions that people “can really count on”? Not so much, it turns out. The Center for Retirement Research at Boston College has been warning about the retirement crisis for some time, but recently they re-analyzed pension data based on new NIPA data that allows a more accurate look at pension accruals. Here’s their updated chart: 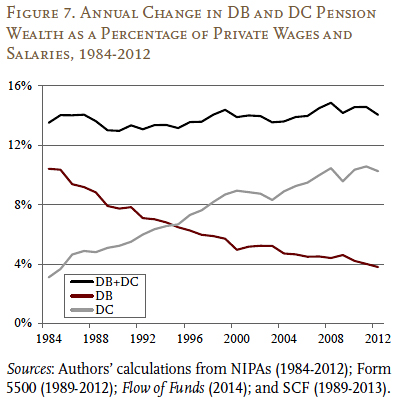 The total pension wealth of the American public has barely budged even as the source of pension wealth has changed dramatically. It was about 13 percent of total wages in 1984 and 14 percent in 2012. CRR’s conclusion from this new data is that “the accumulation of retirement assets has not declined as a result of the shift from defined benefit to defined contribution plans.” As they cheerfully admit, “We are going to have to change our story!”

Now it’s true, in theory, that old-style pensions were safer than 401(k) plans, which bob up and down with the stock market. But this difference is often overstated. For one thing, 401(k) plans generally show fairly steady growth over any time frame more than three or four years. Even the Great Recession only weakened them from 2009-12, and they’ve recovered very nicely since then. For another, all those old pension funds were invested in stocks and bonds as well, and if the market goes south, they go south as well. The most recent example of this is the Teamsters’ Central States Pension Fund.

That said, I concur in part with President Obama. Probably the biggest problem with 401(k)-style plans is that they tend to benefit high earners more than old-style pensions did. The difference isn’t enormous—though we can’t say for sure since distributional detail isn’t available for past decades—but it’s probably true that 401(k)s are somewhat less generous to low earners than older defined-benefit plans were. This is not a fatal defect, however, and it’s one that’s being addressed fairly successfully already. Another problem with 401(k) plans is high fees, and that’s also a problem that’s being addressed—though for my money it could stand to be addressed with considerably more vigor.

Here’s what all this adds up to: the best way to address retirement security is to continue reforming 401(k) plans and to expand Social Security—but only for low-income workers. Middle-class workers are generally doing reasonably well, and certainly as well as they did in the past. We don’t need a massive and expensive expansion of Social Security for everyone, but we do need to make Social Security more generous for the bottom quarter or so of the population that’s doing poorly in both relative and absolute terms. This is something that every liberal ought to support, and hopefully this is the bandwagon that President Obama in now on.