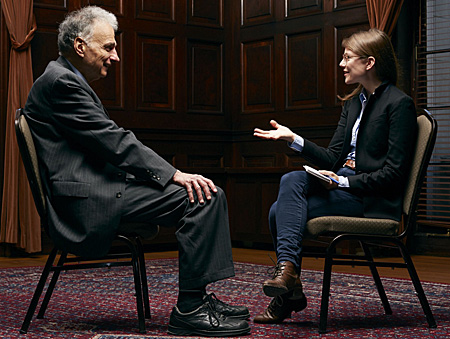 Ralph Nader doesn’t think much of the kids these days. He wants all you millennials to stop your damn texting and Facebooking and build some lasting institutions instead. Here is his Pacific Standard interview with Lydia DePillis:

Do you think Trump has a point about political correctness? That we’ve gotten too uptight?

Oh, yeah. You see it on campuses — what is it called, trigger warnings? It’s gotten absurd. I mean, you repress people, you engage in anger, and what you do is turn people into skins that are blistered by moonbeams. Young men now are far too sensitive because they’ve never been in a draft. They’ve never had a sergeant say, “Hit the ground and do 50 push-ups and I don’t care if there’s mud there.”

….Do you think social media has been a benefit or a harm to organizers?

Well, it’s been a great benefit to Sanders. But I think, on balance, it’s destroying the brains of your generation. In terms of sheer time and sheer trivia and sheer narcissism and sheer emotional pain, it’s unparalleled….This isn’t just like you’re watching television. This is total immersion. And it’s just going to get worse. That means shorter attention spans, less sociability.

….But what if they’re talking to each other through their phones?

Yeah, but it’s not voice. They don’t like to talk by voice. They’re too sensitive.

….What about something like Black Lives Matter, which I think has made quite an impact on the discourse?

….Do you see any promising young movements or leaders that you think are the real deal?

Well, how do you see them? Those kinds of people don’t get on the talk shows anymore….They don’t appear on television anymore. The media’s been completely commercialized and corporatized. It’s so bad that people like you don’t even watch it. Like, do you ever watch Saturday afternoon network shows?

None of your generation does. Do you know what’s on it? You can’t believe how bad it is. About an hour of these bicycle gymnasts competing. Then you have paid infomercials. Then you have horrible third-run B-grade movies.

Bicycle gymnasts? Is he talking about the X Games? But they’re typically on cable, aren’t they?

No matter. Basically, all you kids need to listen to Ralph Nader more. He’s gotten very tired of the fact that you refuse to take his advice these days.