OK, fine, back to Donald Trump. A daily roundup apparently isn’t possible anymore. I guess we need one each for morning, afternoon, and evening. Sigh. Here’s the latest:

Donald Trump announced Monday that he was revoking media credentials from the Washington Post, another sign that he does not tolerate criticism that often comes with presidential campaigns.

Trump has previously banned Politico, BuzzFeed, the Daily Beast, the Des Moines Register and other publications from attending his press events and rallies. But the Post ban is new territory, given the paper’s historic role in covering campaigns and setting the nation’s political agenda.

Hey! Don’t forget about us! Pema Levy has also gotten herself banned from Trump events, which makes me incredibly jealous. Still, I suppose it’s only fair. Pema actually tries to get into Trump events, which is probably a necessary first step to being banned. But I might still have a shot at making one of Trump’s enemies lists, right? I assume he’s got several.

What else? In the kind of plainly unfair reporting that got the Post banned, Max Ehrenfreund wrote an entire article this afternoon about the common Trumpism, “There’s something going on.” Ehrenfreund postsplains: “That phrase, according to political scientists who study conspiracy theories, is characteristic of politicians who seek to exploit the psychology of suspicion and cynicism to win votes.” Roger that.

Then, five hours later, Jenna Johnson followed up with another entire article on the even more common Trumpism: “A lot of people are saying….” That really is probably Trump’s favorite stylistic tic. Note, however, that when he’s referring to himself, it’s always “Everyone says….” As in, “Everyone says I won the debate.” Or “Everyone says the judge has been totally unfair.” Nobody ever asks him to name any 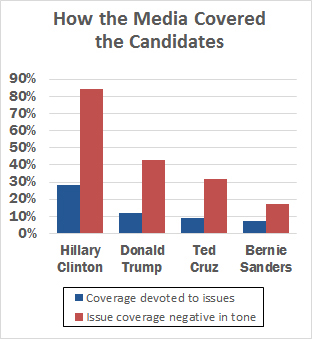 of these people who are saying this stuff, of course. I guess that would be rude or something.

Finally, today brings a new study from the Shorenstein Center on Media, Politics and Public Policy. It’s worth a read, but my favorite part is the chart on the right. It relies on data from Media Tenor, so it hasn’t been cherry picked by the researchers themselves. It shows that (a) only a tiny amount of primary campaign coverage was devoted to issues, (b) of that coverage, Donald Trump’s was 57 percent positive or neutral (!), and (c) Hillary’s was 84 percent negative. That’s issue coverage. Hillary wasn’t just savaged on her tone or her clothing or her poll numbers. She was savaged on the issues, the one place where practically everyone agrees she’s strong and knowledgable. Even if you disagree with her—and that isn’t supposed to affect media coverage—she knows what she’s talking about.

And this wasn’t driven just by Emailgate or Benghazi or whatnot: “Even the non-scandal portion of Clinton’s issue coverage—what she was saying on trade, jobs, foreign policy, and the like—was reported more negatively than positively. Clinton was the only one of the major candidates whose policy platform generated an unfavorable balance of news coverage.“

And people wonder why she avoids the press. Maybe if they treated her with the same dignity and respect they reserve for Donald Trump’s deep and profound knowledge of the issues, she’d open up a bit.