The concept of an Unconditional Basic Income has become a hot topic on the interwebs. Conservative Charles Murray started things up in 2006 with the publication of In Our Hands, which created a brief stir and then sank into oblivion because (surprise!) conservatives were distinctly uninterested in cutting unconditional checks to lazy welfare bums.

Then it came out of hibernation a few months ago for reasons that escape me. At the time, I vaguely figured that much of the credit belonged to Vox’s Dylan Matthews for his tireless advocacy of a UBI. It also, of course, had something to do with the explosion of Bernie mania. Bernie doesn’t actually support a UBI, but he’s said that it’s “something that must be explored” and it pretty plainly fits into his general worldview. Nonetheless, after another 15 minutes of fame, it went into hibernation again. But it refused to die, emerging from its lair yet again a few weeks ago. Considering the fact that a UBI has less chance of being enacted 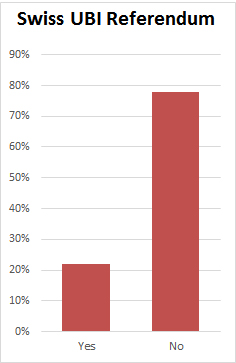 than a law guaranteeing everyone a pet unicorn, this is a little odd. What’s going on?

I’m still not sure, but much of it was probably due to an upcoming UBI referendum in Switzerland, engineered by the lefty Swiss community a couple of years ago. Today, after months of anticipation, they finally voted on it—and the results weren’t pretty. Even in the heart of social democratic Europe, the mere concept of a UBI1 ended up with only 23 percent approval. It’s still in pet unicorn territory.

But eventually it will become reality. We just have to wait for the robot revolution to evolve to the point where lots of middle-class white people are permanently put out of work. Then it swiftly will go from pet unicorn to “duh.” I imagine this transformation will take a surprisingly short time and will happen sometime around 2030 or so.

1Despite endless headlines suggesting the Swiss were voting on payouts of $2,500 per month, the actual text of the initiative directs the Swiss parliament only to enact a UBI that “shall enable the whole population to live in human dignity and participate in public life.” The actual level and financing of the UBI are not specified.