Will increasingly intelligent automation eventually put humans out of work? There are some plausible reasons to think this might never happen. But there are also some really dumb reasons to think it won’t happen. The dumbest, by a mile, is basically, “That’s what everyone said about the Industrial Revolution and it just made us richer.” This is such a phenomenally stupid argument that I can’t even bring myself to waste time explaining why it’s so dumb.

But there’s another surprisingly common bad argument: “Look around, automation is opening up more jobs for people than ever!” I’m not especially trying to pick on Tim Lee here, but I’m pretty surprised to see him pushing a version of this claim:

Our collective obsession with job-stealing robots can cause us to overestimate the impact of automation — and obscure an important point about the economy. In many service industries, human labor is a mark of luxury. So at the same time robots destroy manufacturing jobs, the demand for labor-intensive services is soaring. We can see the signs of this all around 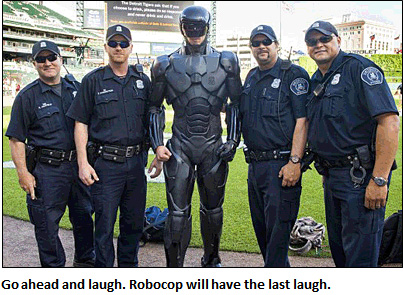 us. There’s the rise of Etsy, an online marketplace whose main selling point is that the products are not mass-produced. [etc.]

….In a sense, it’s possible to automate many aspects of these jobs. Instead of having a therapist come to your home, someone could send you a video demonstrating therapy techniques….For someone who needed therapy care, this kind of semiautomated therapy service would probably be better than nothing. But it’s a lot worse than having a face-to-face meeting with a human being….”Therapy” delivered by an app or even a robot is a different kind of service, just as coffee delivered by a vending machine is a different kind of service than a cup of coffee prepared by a human barista.

This is crazy. All he’s saying is that automation isn’t yet good enough to replace human caretakers or human baristas. But no one says otherwise. As for “handmade,” that’s been a mark of luxury for centuries, ever since “handmade” became a retronym in the first place.

It’s pointless to argue that automation isn’t currently taking away jobs. The evidence is just too ambiguous to allow a firm conclusion on that score, and at most it’s had only a small effect anyway. The only interesting question is whether artificial intelligence will eventually get to the point where robots can drive cars and dig trenches and do your taxes and help old people get around. I happen to think the answer is yes, probably by around 2030 or 2040 or so—but I acknowledge that I might be wrong about that. Maybe it will be more like 2070. Or maybe there’s some not-yet-understood reason that it will never happen at all. Arguments on that score are welcome.

But pointing to the present as evidence that automation is over-hyped is a non-sequitur. Nobody’s arguing that robots today can make your coffee or keep the elderly company, so why even bring it up? In another few decades, though, I’ll bet the elderly will prefer robot caretakers who are endlessly patient, willing to talk on any subject, and never screw up. There won’t be a person in the country who’d prefer the crappy, ill-trained, and unreliable level of care and attention that most nursing home residents receive today.

Just to wrap up, then, here are the two worst arguments against the eventual job-killing rise of intelligent robots:

Neither one of these arguments offers the slightest insight into what will happen if and when AI becomes human level or close to it. If you come across either one, just back away slowly and move on to the latest cute cat video on YouTube.