By the standards of earlier this week, today was surprisingly quiet on the Trump front. I think his supporters were all taking a deep breath and steeling themselves for whatever he does next. Still, there were a few tidbits.

We can start with last January, when the US government announced that (a) it had finally reached an agreement to pay Iran $1.7 billion to settle claims that had been in litigation since 1979, and (b) Iran would release four US prisoners. Was this timing just a coincidence, or was this actually a ransom payment? Republicans all insisted it was ransom, of course, and Obama insisted it wasn’t. It was a story for a couple of days and then disappeared.

Until yesterday, when the Wall Street Journal reported that the initial payment of $400 million was made in cash. That is, pallets stacked with euro notes and Swiss francs. This was kind of juicy, though it wasn’t really news. The agreement is still for $1.7 billion, the same as always. But then Trump stepped in to say that he’d seen a really high-quality “military” video of Iran unloading the stacks of cash. Everyone was bewildered. No such video exists, as far as anyone knows. So what did Trump really see?

The Washington Post asked Trump’s staff to explain what Trump was talking about and emailed a link to a Fox News clip that showed the January footage from Geneva, asking if that was the video the nominee saw. “Yes,” spokeswoman Hope Hicks responded in an email. “Merely the b-roll footage included in every broadcast.”

The January footage from Geneva? What’s that? According to the Post, it’s “dark, grainy footage of shadowy figures walking off a small private plane with bags in hand,” taken in Geneva where three of the American prisoners first landed after being released. Not Iran. Not military. Not top secret. No stacks of cash. The Trump campaign has explicitly admitted this. So what did Trump do today? Do I even have to tell you?

Despite Donald Trump’s claim of having seen video footage of the $400 million cash delivery to Iran having been acknowledged as false by his own campaign, the Manhattan billionaire kicked off a rally Thursday afternoon by repeating the tall tale.

….Trump once again spoke of the nonexistent footage at his rally Thursday in Portland, Maine….He suggested that the payment was made in a combination of euros, Swiss francs and other currencies because “they probably don’t want our currency.”

For the record, the deal was done in euros and francs because US law prohibits the transfer of dollars to Iran. But whatever. In that same rally, Trump:

In other words, just another day on the ranch for Trump. Here’s another slice of life from that same rally:

People at a Trump rally hold up copies of the constitution. They are booed, and escorted from the room. This is definitely a new GOP.

See? Tea partiers will literally boo at anything if it happens to be associated with Democrats. In the upper echelons of the Republican Party, things are no better: Trump’s supporters are getting nervous and starting to turn on each other. Remember the “intervention” that was supposed to happen yesterday? Rudy Giuliani blamed the whole fiasco on Newt Gingrich:

“That word, I think, honestly I love him dearly, but I think that word was used by Newt in a memo that got around,” Giuliani said. “What a ridiculous word. An intervention is for a drug addict and it’s for someone who’s an alcoholic and I’ve had to do them with people at times. There’s nothing wrong with them, if that’s the case. Donald Trump doesn’t drink or smoke, by the way. We don’t have that problem.“

Well, no, not that problem. But we do have another problem: Trump is looking increasingly deranged, hardly the kind of person you want near the nuclear codes. What do you think of that, John McCain?

QUESTION: Are you comfortable with Donald Trump possibly having control of the nuclear arsenal?

McCAIN: [Silence, followed by unintelligible stammering.] Anyone that the people of this country choose to be the commander in chief….Anyone who is elected president fairly in this country….The American people select the next 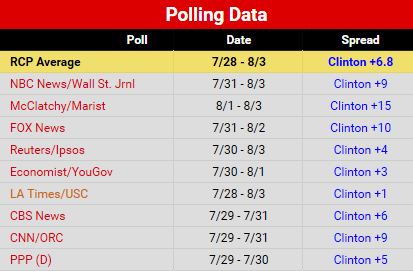 president of the United States….I have the utmost respect for the verdict of the people.

Hmmm. Perhaps you noticed that McCain never actually answered the question? So did a lot of other people. In other news, there’s a kerfuffle going on about whether Melania Trump is an illegal immigrant. Paul Ryan made it clear that he doesn’t think much of Trump and is pretty sure he’s going to lose in a landslide. Indeed, multiple polls now show Hillary Clinton with a huge lead over Trump. Her lead is so big that she’s even “paused” her advertising in Virginia because it’s not clear if she needs it anymore. Who knows? Maybe this will turn out to be the cheapest presidential campaign in recent memory.

Speaking over the phone for an unrelated story, Carl Paladino—the 2010 GOP candidate for governor of New York—abruptly changed subjects and assailed the sitting president and his policies. The Buffalo-based real estate developer and Tea Party activist maintained that Obama, a practicing Christian, has sought to mislead the public about his religious affiliation, but that the citizenry has not fallen for his falsehoods.

“In the mind of the average American, there is no doubt he is a Muslim,” Paladino said. “He is not a Christian.”

Just to make this perfect, it appeared in the New York Observer, owned by Ivanka Trump’s husband, Jared Kushner.