I had to take a quick trip to Procyon 5 this afternoon and my ansible broke down. So I’m out of touch. What’s been going on? I see that Trump spokesperson Katrina Pierson has admitted that Obama wasn’t responsible for the death of Captain Humayun Khan in 2004:

Given the opportunity to apologize the next morning on the same network, Pierson said grudgingly, “apologize for the timeline,” before launching into another full-throated defense of Trump.

Now we’re talking! Maybe this means the Trump team is finally making its long-awaited pivot to a more restrained general election posture. What do you think about that, Joe Scarborough?

During a conversation with former CIA director Michael Hayden, Scarborough said a “foreign policy expert on the international level” advised Trump several months ago and the Republican nominee for president asked questions about nuclear weapons that might terrify you.

That’s…not so good. But it was “several months ago.” Let’s not hold it against Trump. How are other Republicans reacting to all this? 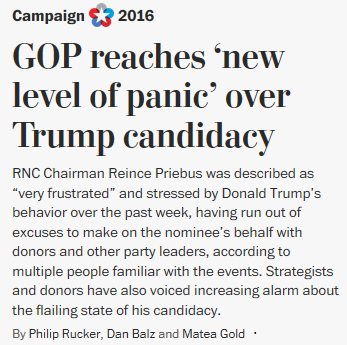 Oh dear. Well, at least Trump still has Newt Gingrich. I mean, the guy defended Trump even when he said he might not defend a NATO ally against a Russian attack. That’s a true friend. What do you have to say, Newt?

“Trump is helping [Hillary Clinton] to win by proving he is more unacceptable than she is….Anybody who is horrified by Hillary should hope that Trump will take a deep breath and learn some new skills,” he said. “He cannot win the presidency operating the way he is now. She can’t be bad enough to elect him if he’s determined to make this many mistakes.”

Anyone else want to weigh in?

Ed Rollins, a co-chairman of a super PAC backing Donald Trump, thinks that Trump is watching too much TV, and that he needs something akin to horse blinders, because he gets too caught up in attacking his opponents.

“I think one of Donald Trump’s singular difficulties with this campaign is that he sits and watches TV all day long and feels he has to react to every single thing that’s said against him,” Rollins said today on Kilmeade and Friends when asked how he thought Trump was handling criticism leveled at him by Khizr and Ghazala Khan, the parents of a slain Muslim American soldier.

This all prompted a lot of chatter about “interventions” earlier today. Supposedly a team of Gingrich, Reince Priebus, and Rudy Giuliani was going to make a pilgrimage to Trump Tower and beg Trump to clean up his act. (Chris Christie wasn’t on the team because he’s still nursing a grudge over not being chosen for vice president.) But that never materialized. For now, the operative strategy remains, “Let Trump be Trump.”

In the meantime, the Daily Beast reports that the Trump campaign really did intervene to soften the Republican Party platform on the subject of Ukraine:

Top Trump aide Paul Manafort swore that the campaign had nothing to do with a radical change in the official Republican Party position on Ukraine. He was lying.

Manafort said on NBC’s Meet the Press this past weekend that the change in language on Ukraine “absolutely did not come from the Trump campaign.” But this account is contradicted by four sources in the room, both for and against the language.

….Meanwhile, records for the meeting seem to have disappeared. A co-chair for the national security platform subcommittee told The Daily Beast that the minutes for the meeting have been discarded. The Republican National Committee had 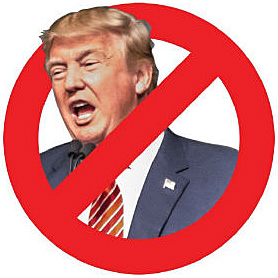 no comment when asked whether this was standard procedure for all the subcommittees.

Funny thing. Trump used to be pretty hawkish about Ukraine, as you’d expect. But that changed a few months ago. Why?

While the reason for his shift is not clear, Trump’s more conciliatory words — which contradict his own party’s official platform — follow his recent association with several people sympathetic to Russian influence in Ukraine. They include his campaign manager Paul Manafort, who has worked for Ukraine’s deposed pro-Russian president, his foreign policy adviser Carter Page, and the former secretary of state and national security adviser Henry Kissinger.

So Manafort not only lied about this, but he was probably the guy directly responsible for softening the Ukraine plank in the first place. But what about this Carter Page guy? What’s he all about?

“Washington and other Western capitals have impeded potential progress through their often hypocritical focus on ideas such as democratization, inequality, corruption, and regime change,” Page said last month during a commencement speech at a Moscow economics graduate school.

….Page also suggested the United States should ease economic sanctions imposed on Russia following its 2014 incursion into Ukraine and Crimea, which was condemned in an overwhelming vote in the United Nations. In exchange for sanctions relief, Page said, American companies might be invited to partner with Russian firms to exploit Russia’s oil and gas fields.

Page has close ties to Gazprom, so I suppose he’s pretty annoyed with the US sanctions on Russian oil and gas. And we all know how loyal Trump is to his friends, so he probably figures he should help out a pal by easing up on Russia. Plus Putin is a helluva guy anyway, amirite?

On another subject, I’ve gotten several questions about why I’m not doing a Hillary Clinton roundup each day. It’s because she’s not doing much. As near as I can tell, she’s decided that if her opponent wants to douse himself in gasoline and light himself on fire, she should lie low and give him as much air time as he wants. You see, contrary to popular opinion, it turns out that all press is not good press. Just ask Charlie Sheen.