The debate continues over whether Donald Trump’s blue-collar supporters—virtually of them white—are motivated by economic anxiety or racial anxiety. I think the evidence is pretty clear that racial anxiety plays the larger role, but it’s hardly the only role. Economic anxiety is real too.

The usual response is that this just can’t be true. White men make more money than black men, which means they have less economic anxiety than black men. So why do they support Trump and black men don’t? It must be racial animus.

But this is wrong. I’ve made this point before, but I want to make it again: economic contentment is largely related to change, not to absolute levels of income. A Chinese peasant who makes $10 per day lives in dire poverty. But if that peasant made $5 per day a few years ago and now has indoor plumbing, he’s probably pretty happy. Things are getting better. On the flip side, an American manager 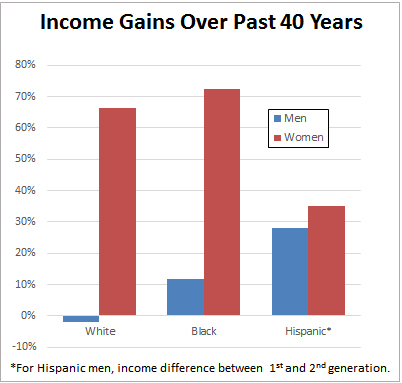 who makes $80,000 has a pretty good income. But if he made $100,000 a couple of years ago, he’s probably tearing his hair out. He built a life around his $100,000 income—mortgage payments, car payments, property taxes, insurance, etc.—and suddenly he has to cut back and probably go into debt. Life sucks.

This should be obvious. In the Middle Ages, pretty much everyone lived in grinding poverty by today’s standards. Do we suppose that all of them were desperately unhappy? Of course not. As long as things were going the same as always, they were probably about as happy as us. But if a crop failed, they became desperate.

I’ve long thought that the single most interesting finding of behavioral economics is the fact that people respond to loss far more sharply than they respond to gain.1 In money terms, it’s a factor of about 2:1. Even a small loss—in money, in status, in living standards—will cause enormous anxiety. And that loss can be relative as well as absolute.

I’ve posted the chart on the right before, and I can’t guarantee that it’s precisely accurate. But it’s roughly correct, and what it shows is that every demographic has made economic progress over the past 40 years except for one: white men. Some of those gains might be small—11 percent over four decades for black men isn’t much—but at least it’s a gain. White men alone have lost ground. And more to the point, in relative terms they’ve lost lots of ground.

So is it plausible that a lot of white men feel economically anxious even if their absolute incomes are still higher than women, higher than blacks, and higher than Hispanics? Sure. What matters is loss, and white men have been losing relative ground for a long time. They’ve lost ground economically and they’ve lost status as well. White men used to be kings of the hill, but now they can hear the footsteps of other folks catching up to them. Economic anxiety, gender anxiety, and racial anxiety are all perfectly normal consequences of this.

1Needless to say, economists didn’t really discover this. They just quantified it. But this dynamic has been obvious for a very long time to observers of human nature. Examples are legion, but here’s one my readers might appreciate. It’s from Isaac Asimov’s Caves of Steel, published in 1953:

It was the addition of status that brought the little things: a more comfortable seat here, a better cut of meat there, a shorter wait in line at the other place. To the philosophical mind, these items might seem scarcely worth any great trouble to acquire. Yet no one, however philosophical, could give up those privileges, once acquired, without a pang.

There’s more after that. Just generally, though, writers throughout history have acknowledged that the humiliation which accompanies a loss of status is a very strong emotion indeed.