Donald Trump released a fancifully-named “fact sheet” today about his economic plan. He says it’s going to be great!

Trump has clearly internalized the lesson of PT Barnum: if you’re going to lie, you might as well lie big. So why not say his tax plan will create 25 million jobs? Hell, why not a hundred million? Today’s announcement is a shiny new tax plan that’s apparently scaled back from his old tax plan, but the Tax Policy Center figures that even Trump’s old plan would likely create no jobs at all because its huge deficits would outweigh the impact of its tax cuts. Even the conservative Tax Foundation, after waving some dynamic scoring pixie dust around, could only bring itself to suggest it might create 5 million jobs. (All of these numbers are over ten years.) Since the new plan is smaller, its impact would be smaller too.

As for “unbridled” economic growth, Trump’s team actually means 3.5 percent growth per year for a decade. This is equally ridiculous. The TPC figured Trump’s old plan would likely have no impact on growth at all. 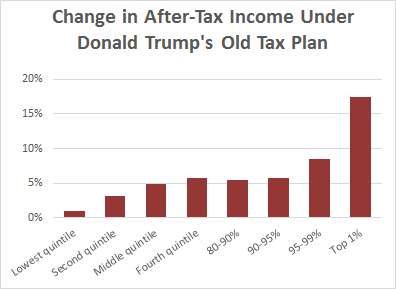 And once again: since the new tax plan is smaller, its impact will be smaller too.

But there are a few things that everyone agrees on. Both TPC and the Tax Foundation say that Trump’s plan would blow up the deficit. The old plan was a $10 trillion budget buster, while the new plan apparently clocks in at about $4.4 trillion. As for who benefits, both agreed that under Trump’s old plan the biggest tax reductions go to the very rich. The chart on the right is from the TPC, which figures the poor would gain about 1 percent while the top earners would gain about 21 percent. The Tax Foundation is on the same page. Even after they spray the pixie dust around, the rich still do far better than the poor. I gather that the new plan doubles the standard deduction as a way of throwing a bigger bone to the poor and middle class, but the odds are slim that this will make up for Trump’s huge giveaway to the rich.

What else? Trump, of course, wants to do away with all sorts of environmental rules. In fact, those are pretty much the only rules he wants to get rid of. Except for this one:

The FDA Food Police, which dictate how the federal government expects farmers to produce fruits and vegetables and even dictates the nutritional content of dog food. The rules govern the soil farmers use, farm and food production hygiene, food packaging, food temperatures, and even what animals may roam which fields and when. It also greatly increased inspections of food “facilities,” and levies new taxes to pay for this inspection overkill.

So that’s that. Our food supply has been so trouble free lately that Trump figures we can just do away with the FDA “police” who are constantly whinging on about hygeine and storage temperature and other nonsense.

Finally, Trump introduces his “penny plan”: a reduction in non-defense spending of 1 percent per year for ten years. You will be unsurprised to learn that this is a trick: it’s not adjusted for inflation. Trump says that over a decade his plan will reduce domestic spending from $518 billion to $468 billion. But if you account for inflation over the next decade (I used 2 percent per year as a guess), this produces a whopping cut of 25 percent in domestic spending. I am very eager to hear which quarter of our domestic spending Trump plans to cut.

But I’m not holding my breath.

POSTSCRIPT: By the way, even if Trump did somehow cut a quarter of domestic spending, that’s $130 billion. He’s got about $310 billion to go if he wants his spending cuts to match his tax cuts.

POSTSCRIPT 2: I know none of this matters. It’s math! Math is hard! And nobody believes that Trump is serious about all this anyway. It’s just random words on a page to show that he’s presidential. Still, it’s what I do.