What do you think of Vladimir Putin? Personally, I think he’s a thuggish autocrat, and the fact that Donald Trump seems to admire him is just one more nail in the coffin of Trump’s obvious unsuitability to be elected dogcatcher, let alone president of the United States.

But criticism of Putin—and Trump’s embrace of him—has recently become something of a lightning rod on the left, proving once again that there’s nothing too trivial for lefties to fight over. Today, for example, Glenn Greenwald charged Democrats with hypocrisy over their newfound belligerence toward Russia. The current story among Trump-hating liberals, he says, is that:

Russia is a Grave Enemy of the U.S.; anyone who advocates better relations or less tension with Moscow is a likely sympathizer, stooge, or even agent of Putin; and any associations with the Kremlin render one’s loyalties suspect.

….Despite the fact that Russia has ceased long ago to be guided by anything resembling Communism, this linking of one’s political adversaries to the Kremlin is such a potent tactic in the U.S. because of decades of Cold War rhetoric about Moscow. Referring to Putin, Matt Lauer this week asked of Trump: “Do you want to be complimented by that former KGB officer.” Denouncing Trump’s praise of Putin, Democratic Congressman Charlie Rangel called the Russian President “a communist leader that’s a potential enemy!” Explaining why Trump’s comments about Russia are so remarkable, The New York Times contended that “Mr. Trump has made improved relations with the Kremlin a centerpiece of his candidacy” in “a fashion that would have been unheard-of for a Republican during or immediately after the Cold War.”

The whole thing is Greenwaldian in length, not even counting all the videos he wants you to watch, and you may or may not want to read the whole thing. The basic gist is that Obama took office promising to “reset” relations with Russia, and Democrats in general are usually in favor of relaxing tensions with global adversaries. But now that Trump is the one trying to relax tensions, Putin is once again a big, bad guy.

And, you know, fine. There’s no question that presidential campaigns cause some measure of hypocrisy all around. But this is one of those things where context matters a lot. Obama really did try to cool relations with Russia, culminating in his successful passage of the New START treaty. But then Russia annexed Crimea and secretly invaded Ukraine. This naturally caused considerable nervousness among the Baltic states, who were worried the same thing might happen to them. All of NATO imposed sanctions on Russia over this, and Obama made it clear that NATO guarantees applied to the Baltics. As usual with Obama, his rhetoric remains relatively restrained, and he’s continued to try to work with Russia here and there. But Putin has made it pretty clear that his interests and ours diverge considerably.

Then, of course, there’s Putin himself, a guy who jails dissidents, muzzles the press, murders his political opponents, and has apparently tried to hack the DNC in order to interfere with American elections. All in all, there’s pretty good reason to 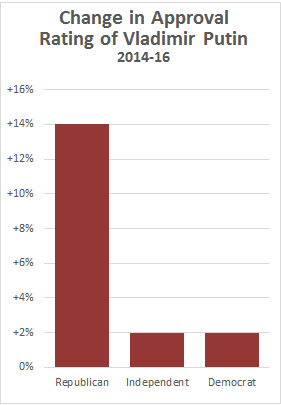 But Trump admires Putin because he’s a “strong leader.” He declined to support NATO guarantees of the Baltics. He wants to reorient NATO away from Russia entirely. He welcomed Russia’s incursion into Syria, even though it was pretty clearly not intended to fight ISIS. He suggested that Putin’s human rights record wasn’t really anything to be worried about. He pretty clearly signaled that he doesn’t care much about Russia’s invasion of either Crimea or Ukraine. And as Will Jordan points out, this all makes a difference. Among Democrats and Independents, views of Putin haven’t changed much. But among Republicans, Putin’s approval ratings have shot up. There’s not really any explanation for this aside from Trump’s odd love affair with the guy.

Like Obama—and Greenwald—I’m happy to dispense with jingoism and adopt a generally calm approach toward Russia. But Trump has gone quite a ways beyond this, and it’s perfectly fair to criticize him for it. I don’t want a president who seems to think that Putin is his buddy. Or that Putin admires him. Or that we should casually toss aside treaty obligations. Putin would eat Trump for lunch, and I’d just as soon remain clearheaded about what a loathsome human being he is.