Over at Wonkblog, Carolyn Johnson writes about a new Kaiser study showing that deductibles have skyrocketed over the past few years:

During the past five years, deductibles have grown 10 times faster than inflation and nearly six times faster than wages, according to the new report….For the first time, employer-sponsored health plans also reached a new benchmark: Half of all workers who receive insurance through their employers faced a deductible of at least $1,000 a year for individual coverage — up from just 10 percent of workers in 2006,

“We’ve been so fixated on the Affordable Care Act, we’ve missed a gradual sea change in what health insurance is for most Americans,” said Drew Altman, president of the Kaiser Family Foundation. “It’s why, if we were ever to tell an average person that we’re living in a period of historic moderation in health care costs, they would probably think we’re out of our minds — because what they pay out of pocket has been going up over time….That’s kind of the pain index for people.”

This isn’t quite right, I think. Deductibles have gone up, but total out-of-pocket spending hasn’t. Here’s what personal spending on medical care looks like: 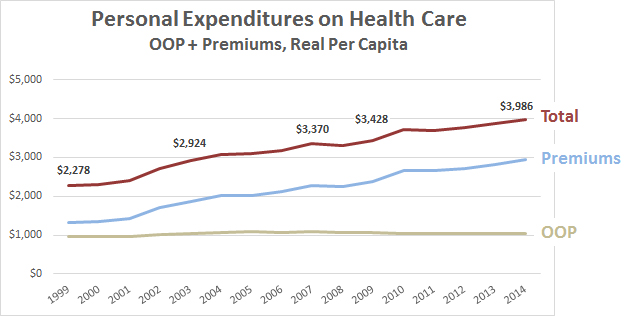 There’s nothing fancy here. Out-of-pocket spending comes from the National Health Expenditure Accounts. Premium cost is an average of the worker share of single and family premiums from the Kaiser Family Foundation. Both are adjusted for inflation using the CPI.

The worker share of premiums has gone up considerably since 1999. However, out-of-pocket costs have stayed remarkably stable. Deductibles may be going up, but the amount people actually spend on medical care out of their own pockets hasn’t.

Despite this, I think Altman is basically right. What’s happening is that higher deductibles are making people far more aware of health care costs. They feel like they’re constantly weighing whether or not to skip something their doctor recommends. Or they’re shopping around for a better price. Or spending the money but then having to pay the bill. This makes them feel pinched even if, in the end, they’re spending the same amount as always.

On a national level, the growth rate of health care costs has eased off considerably. But on a personal level, that’s invisible. Premiums really are going up a lot, while high deductibles make OOP spending seem like it’s rising even though it isn’t.

So what’s the direction of causation? Is the worker share of premiums going up because companies can’t afford ever higher health care costs? Or is the growth rate of medical costs leveling off because consumers are getting pinched and starting to fight back? Yes and yes. Which is just another way of saying that medical costs will continue to rise until, collectively, we’re not willing to spend any more. We’re not quite there yet, but I don’t think we’re very far off.