I bookmarked this a couple of days ago, but haven’t gotten around to posting about it yet. Here is Nina Burleigh on how President Bush “lost” 22 million emails:

….Like Clinton, the Bush White House used a private email server—its was owned by the Republican National Committee. And the Bush administration failed to store its emails, as required by law, and then refused to comply with a congressional subpoena seeking some of those emails.

….Most troubling, researchers found a suspicious pattern in the White House email system blackouts, including periods when there were no 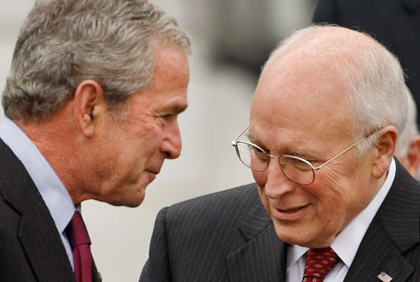 emails available from the office of Vice President Dick Cheney.

….In 2003, a whistleblower told the National Security Archive [a private watchdog group] that the George W. Bush White House was no longer saving its emails. The Archive…refiled their original lawsuit. The plaintiffs soon discovered that Bush aides had simply shut down the Clinton automatic email archive, and they identified the start date of the lost emails as January 1, 2003.

….In court in May 2008, administration lawyers contended that the White House had lost three months’ worth of email backups from the initial days of the Iraq War. Bush aides thus evaded a court-ordered deadline to describe the contents of digital backup believed to contain emails deleted in 2003 between March—when the U.S. invaded Iraq—and September….Eventually, the Bush White House admitted it had lost 22 million emails, not 5 million. Then, in December 2009—well into Barack Obama’s administration—the White House said it found 22 million emails, dated between 2003 and 2005, that it claimed had been mislabeled.

This did not go unreported at the time. But it didn’t get much reporting, despite the fact that there’s far clearer evidence here of deliberate stonewalling and lawbreaking than anything that even the fever swamps suggest about Hillary Clinton’s emails.

For Hillary Clinton, the most politically damaging aspect of her recent health scare is not any new revelation but the reemergence of an old pattern. The image of her buckling at the knees Sunday pushed doubts about her personal well-being from the crazy realm of conspiracy mongering squarely into the mainstream of serious discussion.

Making things much worse, though, was her campaign’s handling of the episode — the delays, the half-explanations, the grudging trickle of information — which played to some deep concerns going back to Clinton’s White House days and controversies over openness and candor.

Far and away the biggest impediment standing between Clinton and the White House is the fact that a great many voters, including some with every intention of voting for the former first lady and secretary of State, simply do not trust her.

I don’t blame Barabak for writing this. It’s annoying, but it’s also true: Clinton’s handing of her pneumonia really does feed into the narrative of her as secretive and only grudgingly honest. This narrative may or may not be fair, but it’s there—and Clinton knows it perfectly well. This is what makes it so frustrating for her supporters that she scored such an own goal over this. If she had announced the pneumonia diagnosis on Friday, the universal response would have been sympathy. It’s rotten luck to pick up a bug like this in the middle of a campaign. Instead, she’s opened herself up to yet another round of criticism.

In the end, there’s very little to gripe about in either of these recent Clinton stories. She made a dumb mistake using a private server and a single email account while she was Secretary of State, but in the end there’s little evidence of any actual wrongdoing. Likewise, she was dumb to withhold news of her pneumonia. But obviously there’s no wrongdoing here at all, just a misplaced sense of privacy that simply doesn’t exist for presidential candidates.