Miscellaneous thing #1: NFL viewership is down sharply this year. Is it because of Colin Kaepernick? That’s the favorite explanation from conservatives, but today the New York Times tells us this:

The two most successful sports leagues in the world, which bring in billions of dollars in revenue, the biggest corporate sponsors and mammoth audiences every game day, are now sharing an altogether different experience: The National Football League and the English Premier League are enduring startling, double-digital declines in television viewership this season.

The Premier League is obviously not suffering from a Kaepernick backlash. So why are those two sports behemoths falling on hard times, but not others? It’s a chin scratcher. I don’t know much about English soccer, but my personal guess about the NFL is that it’s just boring this year. I’m not quite sure why, but it seems like even the good teams are kind of mediocre and play like they were carved out by a cookie cutter. I’m a very casual but fairly reliable NFL viewer, but I haven’t been bothering to watch very much this year. I just can’t work up much interest.

Miscellaneous thing #2: Are you curious about the Mexican border? Here’s a nice graphic. We’ve already doubled the size of the border patrol and fenced off nearly the entire land border—but although that’s reduced illegal immigration, it hasn’t stopped it. All that’s left is the Rio Grande, which is a very tricky fencing project indeed. Maybe a bigger, tougher fence would work better, but that’s hardly a slam dunk. 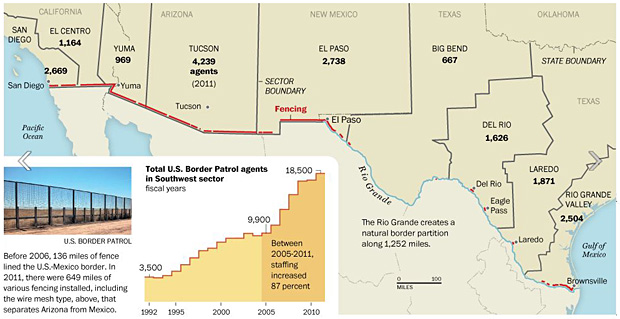 And speaking of borders: have you read Shane Bauer’s story about going undercover with a border militia? You should!

Miscellaneous thing #3: Is the 2016 election just a taste of things to come? Will a more self-disciplined version of Donald Trump take over the Republican Party in 2020 and win where Trump couldn’t? Kevin Mahnken says no:

Trump is sui generis. Ted Cruz entered 2016 with a bulletproof anti-establishment resumé, and look how far he got running as a slightly “cooler, more polished” alternative….Anyone with the requisite political instincts to win a general election would have to temporize eventually, which would mark him as a career politician. Anyone exotic enough to fully copy the Trump playbook would be vaporized by the institutional weaponry of the Republican Party, which won’t be caught sleeping twice in a row.

….Very few politicians exert lasting influence on American political parties. The last ones to do so were Lyndon Johnson (who shattered the remnants of the New Deal coalition and inadvertently established the Democrats as a multiethnic alliance in favor of big government and various liberation movements) and Ronald Reagan (who solidified a pact between the Moral Majority and business elites that is only now breaking down). But these were two-term presidents who won massive legislative victories. Trump, who was never selling a governing ethos to begin with, will be a profoundly rejected figure.

I agree. Trump is unique, and his victory in the primaries this year was a perfect storm sort of fluke. Like Glenn Beck before him, however, he’s had his year in the sun and his brand of performance art has already gotten old. He may go on to a TV career, or he may sink into a deep depression and never be heard from again, but it doesn’t matter. He’s a loser and a laughingstock. At most he’ll motivate future candidates to break a bit from party orthodoxy (on support for free trade, for example, or entitlement cuts) but that’s it.