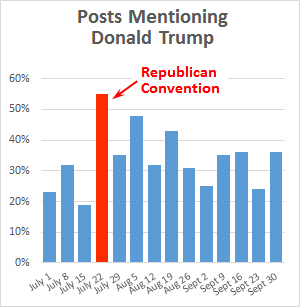 Believe it or not, I try hard not to spend too much time covering every utterance from Donald Trump’s pie hole. Sadly, as the chart on the right shows (data courtesy of Quiddity), I fail more often than I succeed. Today I shall fail again.

First up, John Sides informs us that, even now, an awful lot of voters seem to think that Donald Trump is a self-made man. Nearly half believe that his father was roughly working class or so, rather than the millionaire developer he actually was. Presumably they also don’t know how much money Trump got from his father, either via loans, gifts, or eventually, inheritance.

The truth, of course, is that Trump’s father spotted him nearly $40 million in today’s dollars, and eventually Trump squandered it all:

Most of the $916 million loss that Trump claimed for 1995 is probably derived from about $900 million in bank loans taken out in the mid- to late 1980s that he had personally guaranteed and that he used to wildly overpay for hotels, airlines, yachts, barren land and other trinkets….None of these things are hallmarks of a great business operator or dealmaker.

Trump isn’t that financially sophisticated. In my interviews with him, he had trouble explaining such basic real estate concepts as “cash flow.”…His eyes tend to glaze over when complex numbers come into play. Trump’s own former accountant, Jack Mitnick, told the Times that it was always Trump’s ex-wife Ivana who asked probing questions about the couple’s taxes.

I’ve written about this several times before. Trump did a pretty good job building Trump Tower in 1984, but that was it. He didn’t have the attention span to repeat his success, instead throwing vast amounts of money at lousy businesses that no one else wanted. When that blew up, he managed to take the smoking ruins of his casino operation and turn it into a public company, which he mismanaged to its death, paying himself $82 million along the way. Since then, he’s made nearly all his money from entertainment and licensing.

Will Hillary Clinton bring up this subject in Sunday’s debate? Will she wait until the very last second, as she did with Alicia Machado, guaranteeing that Trump will go ballistic and keep it in the news for the entire following week? Maybe!