Speaker of the House Paul Ryan, on Monday:

Speaker Paul Ryan told House Republicans on a conference call Monday morning that he’s done defending Donald Trump and will focus on maintaining his party’s increasingly imperiled House majority, according to sources on the call….Ryan told his members that “you all need to do what’s best for you in your district,” said a source on the 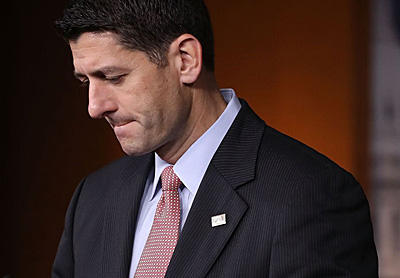 I’ve come to believe [Ryan’s call] was a mistake. As Tim Alberta pointed out, he didn’t really say anything new….All the call did was create more headlines about Republican dissension, make Ryan a hate figure for the Trump right, set Ryan up for the blame if Trump loses, and provoke Trump into pointlessly spending days attacking the speaker. None of this is helpful to anyone, especially to Ryan.

I’ve spent countless hours writing posts about Ryan’s fundamental dishonesty on policy. He plays the part of deficit scold, compassionate conservative, and policy intellectual, but every year he releases a budget roadmap that would cut taxes on the rich, slash services to the poor, and blow up the deficit. Then, despite having the policy chops to know perfectly well what his roadmap would do, he blandly pretends it doesn’t. I have very little patience for this.

That said, I confess to sympathizing with him over Donald Trump. He’s taken a lot of crap from liberals over his hypocrisy in refusing to defend Trump but continuing to endorse him. But what can he realistically do? As he made clear months ago, he’s a leader of the Republican Party. He really has no choice but to endorse the party’s presidential candidate.

So why did he make such a point of abandoning Trump on Monday even though—as Lowry points out—he didn’t really say anything new? I think the reason Ryan spoke up is simple: He may not feel that his position allows him to officially unendorse Trump, but he wanted to make it clear that, in practice, he doesn’t endorse Trump. Lowry believes this was not helpful to Ryan, and I think he’s right about that. What’s more, I’m quite sure Ryan is keenly aware of it. Martin Longman thinks it might cost Ryan the speakership.

In other words, at considerable risk to his own career, Ryan felt like he had to make it clear how disgusted he was by Trump. I have nothing but respect for that. He didn’t have to do it. No one would ever have noticed if he hadn’t. But Ryan has enough of a conscience that he couldn’t stay silent. Kudos to him for that.