Yesterday, the “quid pro quo” that totally should have landed Hillary Clinton in a Supermax for life was all the rage in Trumpian circles. J’accuse! She had one of her minions try to pressure the FBI into declassifying an embarrassing email! Today, Matt Zapotosky interviews FBI official 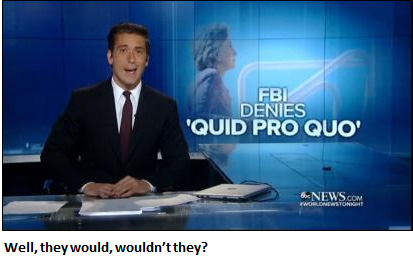 Brian McCauley to get his take on his conversation with State Department official Patrick Kennedy last year. It started when Kennedy called him:

“He said, ‘Brian. Pat Kennedy. I need a favor,’ ” McCauley recalled in an interview Tuesday. “I said, ‘Good, I need a favor. I need our people back in Baghdad.” Then Kennedy, a longtime State Department official, explained what he wanted in return: “There’s an email. I don’t believe it has to be classified.”

….In an hour-long interview with The Washington Post, his first public comments on the matter, McCauley acknowledged that he offered to do a favor in exchange for another favor, but before he had any inkling of what Kennedy wanted….McCauley [] said he asked Kennedy to send him the email in question and then inquired with another bureau official about it….McCauley said that when he learned the missive concerned the attack on the U.S. consulate in Benghazi, Libya, he told Kennedy he could not help him.

“I said, ‘Absolutely not, I can’t help you,’ and he took that, and it was fine,” said McCauley.

Is this really how things went down? There’s no telling. Obviously McCauley has an incentive to make this conversation sound routine and harmless. That said, McCauley’s account is the only one we have, and it sounds perfectly plausible. This is how people talk.

What’s more, it also sounds as if the FBI took another look at the email, turned down Kennedy’s request, and that was that. There was no pressure and no further calls about it. Nor is there any evidence that Hillary Clinton or any of her staffers had anything at all to do with this.

This is what passes for a scandal in Trumpland. It’s also what passes for a scandal in Republicanland these days. Is it any wonder that the public never took seriously Solyndra or Fast & Furious or IRSgate or Benghazi or any of the other manufactured conservative outrages of the past eight years? You can’t keep crying wolf forever. Eventually everyone but the true believers just tunes you out.