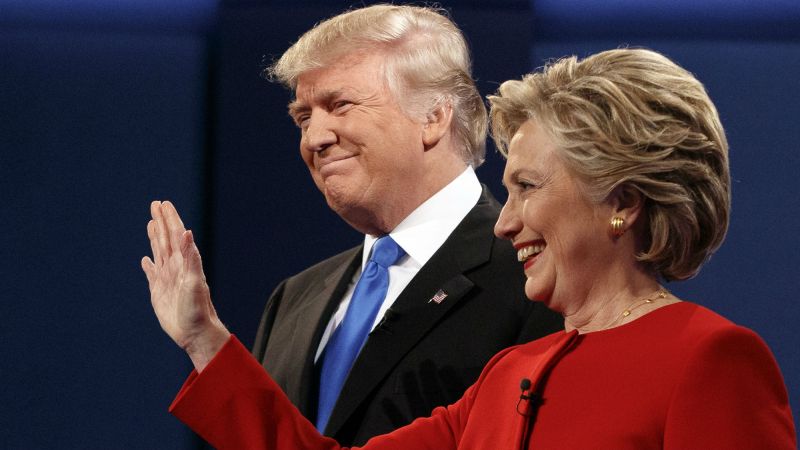 Well. That was something, wasn’t it?

Trump didn’t crash and burn like he did in the first debate, so I suppose that has to be counted as a victory of sorts. But on substance he almost literally said nothing. Every question was used as an opportunity to attack Hillary Clinton in one way or another. She’s a liar; she loves rich people; her husband is a sexual predator; she has “tremendous hate in her heart”; she wants to put coal miners out of business; she ought to be in jail; Michelle Obama hates her; and on and on. I think it’s safe to say that no one in presidential debate history has come anywhere close to being as derogatory as Trump was this evening. He also seems to have decided that he liked Tim Kaine’s VP performance, and insisted on interrupting constantly.

I guess it was something of a Hail Mary. No ordinary debate performance was likely to help Trump at this point, so why not shoot the moon? But it didn’t work. He spit out an endless stream of lies, in the hopes that the audience would just be confused. Maybe a lot of voters will be. But surely the majority won’t be impressed? I hope so, anyway.

Hillary Clinton was aggressive too, but nowhere near on Trump’s level. She called out his lies, but wisely decided not to waste her speaking time trying to refute them all. Trump was ineffective on her emails, and Clinton did a good job of deflecting questions about them. Trump insisted that he never abused any women and the Pussygate tape was just him making empty boasts. Clinton said it showed who he really was. Trump claimed yet again that Clinton’s team started 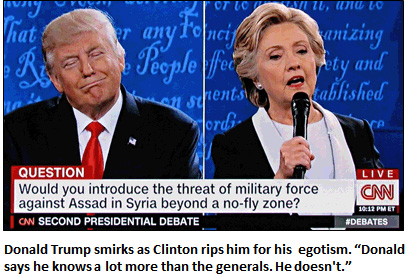 the birther controversy, and twice invoked the specter of the evil Sidney Blumenthal. That’s not going to impress anyone except longtime Clinton haters.

On policy, Clinton was her usual composed self and Trump was his usual hot mess. The Muslim ban “somehow” morphed into extreme vetting. He’ll replace Obamacare with something or other, and it will be fantastic. Saying “radical Islamic terrorism” over and over is the key to fighting ISIS. If he wins, he’s going to appoint a special prosecutor to investigate Clinton (!). On Syria, I literally couldn’t understand what he was trying to say.

Overall, this was not quite the shellacking that Trump took in the first debate, but it wasn’t a good look. Unfortunately, we’ll never really know how it affected him. There will be polls next week, but they’ll be responding to both the debate and Trump’s “grab ’em by the pussy” remarks. So there’s no telling what’s causing what.

That said, this was clearly another win for Clinton. She was calm and composed, and got in plenty of shots at Trump. Trump, by contrast, very definitely didn’t look like a guy you want in charge of the nuclear codes.

A full transcript of the debate is here.

A few minutes ago Donald Trump appeared at an impromptu press event with three women who claim to have been abused by Bill Clinton and a fourth who was treated badly by Hillary. That sets a tone, doesn’t it?

10:34 – Is there anything you respect in your opponent? Trump doesn’t want to answer. Clinton says she respects Trump’s children.

10:33 – Still no questions about climate change.

10:32 – Clinton, dryly: “That was very interesting.” I have a comprehensive energy policy etc.

10:30 – How about energy? Trump: Hillary Clinton wants to put all the miners out of business. “There’s such a thing as clean coal.” Now we’re on to the steelworkers for some reason. Solar is great, but now we’re back to coal. Coal, coal, coal. 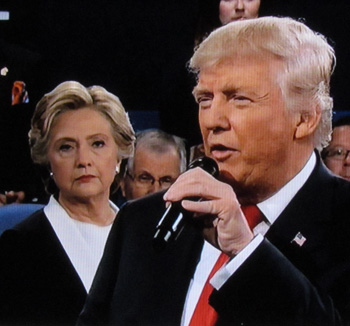 10:27 – Trump: I would appoint judges like Scalia. Judges who respect the Second Amendment. Now Trump is claiming that he’s not taking money from big donors and corporations. He thinks Clinton is rich enough that she ought to be donating lots of money to her own campaign.

10:16 – Question to Trump: “Do you believe that you can be a devoted president to all of the people of the United States?” Weird question.

10:15 – Clinton says she’s in favor of arming the Kurds. Trump complains again that Clinton is getting too much time to speak.

10:10 – Is Trump in favor of intervening in Syria? Or staying out? I can’t tell. Now Trump is ranting about not keeping our military plans secret.

10:08 – I literally don’t even know what Trump is saying about Syria. I guess Raddatz doesn’t either. “Let me ask the question again.” Trump then says that he disagrees with Mike Pence about Russia.

10:03 – Raddatz finally manages to shut Trump down and move on to another subject even though Trump insists that he should be able to respond yet again. Good for her.

10:02 – So far a grand total of two ordinary citizens have asked questions. This isn’t much of a town hall.

10:00 – Why didn’t Clinton change the tax code? Clinton: “Because I was a senator under a Republican president.” Trump interrupts to insist that she could have done it anyway if she really wanted to.

9:58 – Trump now basically admitting he used his $916 million operating loss to avoid paying taxes. “Of course I did.” Now ranting about how everyone does it and Clinton never tried to fix it because her rich donor pals like the tax code the way it is.

9:57 – Clinton hammering on Trump for paying no taxes for past 20 years. Obviously she’s trying to bait Trump.

9:54 – What will you do ensure that the rich pay their fair share in taxes? Trump mentions the carried interest loophole, and that’s it. The rest of his answer is a long free association that has nothing to do with the rich.

9:52 – Trump is sniffing again. Maybe he really does do this every time he speaks?

9:48 – How aggressive would Trump be in the debate? We have our answer. He’s just attacking without stop and now griping about not getting enough time. Bush league.

9:40 – Clinton: “Trump is playing into the hands of the terrorists.”

9:38 – What are you going to do about Islamaphobia? Trump: We have to say “radical Islamic terrorism” as often as possible.

9:36 – Trump is all over the map on how he’ll replace Obamacare. Mostly he’s doubling down on the notion that allowing insurance companies to compete across 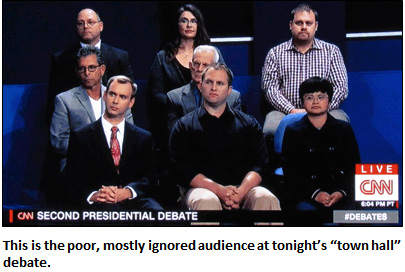 state lines will fix everything. Clinton is biting her lip to keep from laughing.

9:29 – Trump is now interrupting constantly. Anderson Cooper tells him to shut up. He won’t. Then he gripes that Cooper hasn’t asked about Clinton’s emails even though they just spent the last five minutes on the topic. “Great, three against one,” Trump whines. I guess “the media hates me” is going to be a big theme tonight.

9:21 – Trump: Blumenthal started the birther rumors. Michelle Obama hates you. Hillary won a rigged primary against Bernie Sanders. If he wins, he is going to appoint a special prosecutor to investigate her. Etc. I guess this is how Trump is going to play things.

9:20 – Clinton quotes Michelle Obama: “When they go low, you go high.” Even bigger applause. Lotsa Trump haters out there too.

9:19 – There was applause for that? Yikes. Lotsa Bill haters still out there.

9:13 – Clinton not going easy on Trump. The Pussygate tape does show who Trump is. He’s unfit to be president. And it’s not just women. Etc.

9:11 – Anderson Cooper insists that Trump tell us whether he’s ever kissed or groped women without their consent. He says he hasn’t. “No one has greater respect for women than me.”

9:08 – Will Hillary Clinton say that we should “move very strongly” on something or other? She should!

9:01 – Dana Bash says Trump’s goal is to keep the Republican Party from abandoning him completely.

8:56 – John King says the town hall format is unpredictable! Sure it is. I think we have a pretty good idea of what’s coming.