Bernie Sanders has taken some heat recently for his remarks to a woman who said she hoped to someday become the second Latina senator and asked him for some tips about getting into politics. His reply, essentially, was that being Latina wasn’t enough. She also needed to “stand up to Wall Street, to the insurance companies, to the drug companies, to the fossil fuel industry.” Nancy LeTourneau was pretty critical of Sanders’ answer:

It is true that in order to end racism and sexism we have to begin by giving women and people of color a seat at the table. But that accomplishes very little unless/until we listen to them and find a way to work with them in coalition. To the extent that Sanders wants to avoid doing that in order to foster division within the Democratic Party, he is 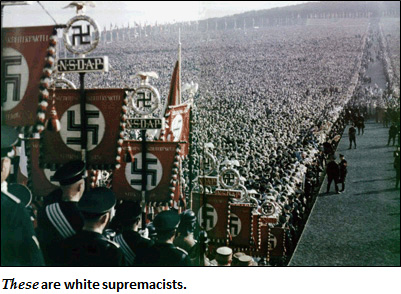 I’m not suggesting that the senator’s agenda is necessarily white male supremacy.

I was listening in on a listserv conversation the other day, and someone asked how and when it became fashionable to use the term “white supremacy” as a substitute for ordinary racism. Good question. I don’t know the answer, but my guess is that it started with Ta-Nehisi Coates, who began using it frequently a little while ago. Anyone have a better idea?

For what it’s worth, this is a terrible fad. With the exception of actual neo-Nazis and a few others, there isn’t anyone in America who’s trying to promote the idea that whites are inherently superior to blacks or Latinos. Conversely, there are loads of Americans who display signs of overt racism—or unconscious bias or racial insensitivity or resentment over loss of status—in varying degrees.

This isn’t just pedantic. It matters. It’s bad enough that liberals toss around charges of racism with more abandon than we should, but it’s far worse if we start calling every sign of racial animus—big or small, accidental or deliberate—white supremacy. I can hardly imagine a better way of proving to the non-liberal community that we’re all a bunch of out-of-touch nutbars who are going to label everyone and everything we don’t like as racist.

Likewise, using a faddish term is not a sign of wokeness, no matter who started it. Let’s keep calling out real racism whenever we need to, but let’s save “white supremacy” for the people and institutions that really deserve it.1

1For example, there’s the faction of the alt-right that really is dedicated to white supremacism. You can read all about them here, here, and here.

POSTSCRIPT: I may be wrong about this, but I gather that some people use “white supremacy” because they want to avoid the R word as too antagonistic. Needless to say, this is also a bad idea. If something is racist, call it racist. If it’s not, don’t call it that.