From the LA Times:

A Texas judge blocked President Obama’s bid to expand overtime pay protections to millions of Americans on Tuesday, thwarting a key presidential priority just days before it was set to take effect. The Labor Department rule would have doubled the salary level at which hourly 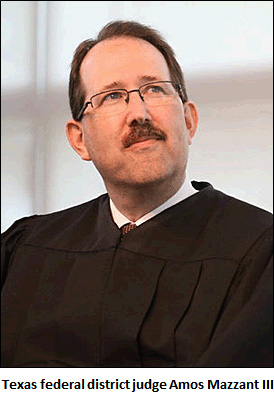 workers must be paid extra for overtime pay, from $23,660 to $47,476. Siding with business groups including the U.S. Chamber of Commerce, Texas District Judge Amos L. Mazzant III halted it.

It’s the fourth time in 21 months that a federal judge in Texas has issued a nationwide injunction blocking one of President Barack Obama’s executive orders [actually, it was a federal regulation –ed]. The other Obama initiatives stymied in Texas courtrooms involved shielding undocumented immigrants from deportation, mandating bathroom access for transgender students, and requiring labor-violation disclosures by federal contractors.

….U.S. District Judge Amos L. Mazzant III in Sherman, Texas, rejected a request by the federal government to limit any order to the states that filed the lawsuit and issued a preliminary injunction blocking the new salary cutoff nationwide.

I guess that’s that. If you want a local judge to block an Obama initiative and apply his ruling to the entire country, go to Texas. Apparently they’re all willing to do it down there.

In case you’re interested, here’s the key paragraph from the judge’s ruling:

To be exempt from overtime, the regulations require an employee to (1) have [executive, administrative or professional] duties; (2) be paid on a salary basis; and (3) meet a minimum salary level….The salary level was purposefully set low to “screen[] out the obviously nonexempt employees making an analysis of duties in such cases unnecessary.”…But this significant increase to the salary level creates essentially a de facto salary-only test.

In other words, exempt employees are supposed to be executive, administrative or professional workers paid on a salary basis. The salary level itself is included in the regulations solely as a convenience. It’s pretty much inconceivable that anyone making less than $23,000 has any bona fide EAP responsibilities, so there’s no point in bothering with the other two tests.

However, someone making $47,000 might very well have genuine EAP responsibilities. Thus, categorically excluding everyone under that level means that some EAP workers will likely get classified as nonexempt solely on the basis of a salary test. This thwarts the will of Congress, which specifically intended that EAP duties had to be taken into account.

That’s the judge’s ruling, anyway. I’ll bet Obama is sorry now that he appointed him.