Let’s start by griping about Trump’s media coverage. As near as I can tell, Trump’s process of choosing a cabinet is pretty ordinary. The president-elect always has a parade of 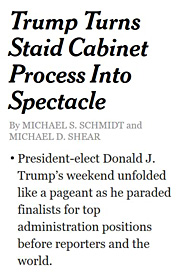 candidates calling on him, and there’s always an endless supply of gossip about who’s likely to get chosen for what—fueled, almost inevitably by “sources close to the candidate.” So why pretend that Trump has turned this into a “spectacle”? If you read the whole story, it doesn’t sound any more spectacular than any other presidential transition. So how about if we stop pretending that everything Trump does is larger than life?

And speaking of the press, Trump met off-the-record today with about 30 or 40 TV media folks. This is apparently fairly common, and is usually a chance to discuss how the incoming administration plans to handle communications and for the press to talk about their concerns. Apparently that’s not how it went this time:

“It was like a f–ing firing squad,” one source said of the encounter. “Trump started with [CNN chief] Jeff Zucker and said ‘I hate your network, everyone at CNN is a liar and you should be ashamed,’ ” the source said.

….“Trump kept saying, ‘We’re in a room of liars, the deceitful dishonest media who got it all wrong.’ He addressed everyone in the room calling the media dishonest, deceitful liars. He called out Jeff Zucker by name and said everyone at CNN was a liar, and CNN was [a] network of liars,” the source said.

It sounds like press relations should go smoothly in the Trump administration. In other news, the Washington Post reports that Trump is planning to shrink the number of federal employees, erode their job protections, and 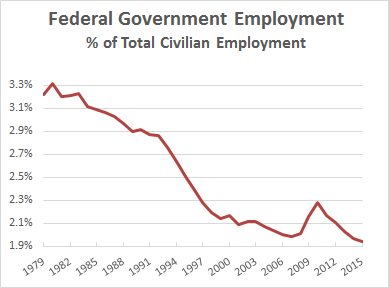 give them crappier pensions. And to top it all off, Steve Bannon will be in charge of all this:

The project aligns with Bannon’s long-stated warnings about the corrupting influence of government and a capital city rampant with “crony capitalism.” Breitbart headlines also provide a possible insight into his views, with federal employees described as overpaid, too numerous and a “privileged class.”

“Number of Government Employees Now Surpasses Manufacturing Jobs by 9,977,000,” the website proclaimed in November. There are 2.1 million federal civilian employees.

This is a Republican evergreen, of course. Still, it’s nice to see that one of Trump’s highest priorities is ending the scourge of skyrocketing federal employment shown in the chart above. Trump plans to make a few exceptions, though:

The heads of the Pentagon and the nation’s intelligence community have recommended to President Obama that the director of the National Security Agency, Adm. Michael S. Rogers, be removed.

….The news comes as Rogers is being considered by President-elect Donald Trump to be his nominee for director of national intelligence to replace Clapper as the official who oversees all 17 U.S. intelligence agencies. In a move apparently unprecedented for a military officer, Rogers, without notifying superiors, traveled to New York to meet with Trump on Thursday at Trump Tower. That caused consternation at senior levels of the administration, according to the officials, who spoke on the condition of anonymity to discuss internal personnel matters.

It’s one thing for a new Republican president to pick national security staffers who are ideologically different from Democrats. That’s to be expected. But Trump seems to be choosing folks who are just lousy at their jobs. Their main qualification is that they got fired or disparaged while Obama was in office. I guess this means Stanley McChrystal must be in line for something next.

That’s enough for now. We can talk about Trump’s unprecedented conflicts of interest some other time. So far, he appears to think that one of the perks of being president is that it’s a great selling point for his branding business.

UPDATE: The original chart showing federal employment was incorrect. It has been updated.