I’ve seen dozens of articles like this over the past week:

Democrats ask themselves: Now what? Who’ll lead the party from the wilderness, and how?

Instead of expanding the political map against Trump into the Republican-leaning reaches of Arizona and Georgia, Democrats are reckoning with the loss of Michigan and Pennsylvania, states they won in the last six elections, and 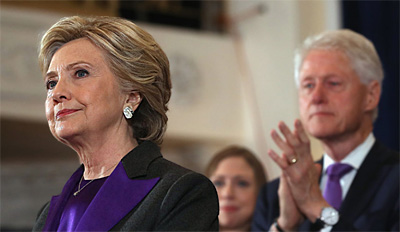 Wisconsin, which had not voted for a Republican for president since 1984.

…The last time the party faced such deep existential angst, after three straight losing presidential campaigns, Democrats shifted their philosophical course and moved closer to the middle, nudged by a fresh-faced Arkansas governor named Bill Clinton. Paul Begala…suggested the party’s message should be a throwback to the one that helped elect Bill Clinton in a time of similar voter anxiety and frustration: “It’s still the economy, stupid,” Begala said.

There’s no question that Democrats are in a heap of trouble outside of Washington, DC. They control fewer governorships and state legislatures than at any time in recent memory. But that’s been true for a while and has nothing in particular to do with this year’s presidential defeat.

So what did cause Hillary Clinton’s loss? This is all still tentative, but as I’ve read more preliminary analysis of county-level returns, I’d say it was three things. Two of them are probably going to piss you off:1

Millennials. This one is pretty clear-cut. Relative to 2012, Hillary Clinton did worse among millennials by a considerable amount. They turned out to vote in their usual numbers, but a lot of them abandoned Clinton for third-party candidates. All told, I’d say this cost Clinton about 5 percent of the millennial vote, which amounts to 1-2 percent of the total vote. Trump, meanwhile, did as well with millennials as Romney did in 2012.

Why? I realize we’re all supposed to move on from this, but I blame Bernie Sanders. He started out fine, but after his campaign took off and he realized he could actually win this thing, he turned harshly negative. Over and over, his audience of passionate millennials heard him trash Clinton as a corrupt, warmongering, corporate shill. After he lost, he endorsed Clinton only slowly and grudgingly, and by the time he started campaigning for her with any enthusiasm, it was too late. I understand that Bernie fans want to deny this obvious reality, but honestly, is it any wonder that Clinton lost a big chunk of the millennial vote?

Why dwell on this? Because it matters whether Clinton’s loss was truly due to problems with either the Democratic agenda or problems with Clinton herself. If, instead, Comey was the difference between winning and losing, then all the circular firing squads are squabbling over flaws that don’t really exist. If Comey had kept his mouth shut and Clinton had won the popular vote by 3.5 percent, she’d be president-elect and we wouldn’t even be talking about all the rest of this stuff. 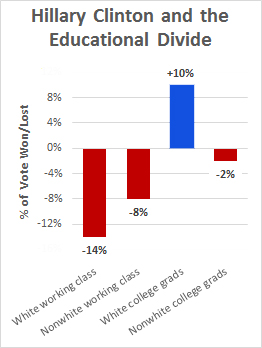 black and Latino working class, she lost 8 points of support.3 Altogether, this cost her about 6 percent of the total vote.

Among white college grads, Clinton gained about 10 points of support. Among black and Latino college grads, she lost about 2 points. Altogether, this gained her about 4 points of the total vote.

The net loss here is about 2 points of the total vote. It’s true that among the working class Clinton lost more among whites than nonwhites, but she lost big among all races. This strongly suggests that the working class was primarily motivated by economic concerns and only secondarily by racial issues. This is the opposite of what I thought during the campaign, but I was wrong.

There are other things that probably made a difference. The press obsession with Clinton’s emails was one. The mediocre economic environment was another. Clinton’s surprisingly poor showing among unmarried men is yet another. And we can add to this some questionable campaign decisions by the Clinton team. But remember: Despite all this, Clinton won the popular vote by about 1.5 percentage points. Neither she nor her agenda were roundly rejected by America.

In the end, then, I basically put the onus for Clinton’s defeat on bitter Bernie, crooked Comey, and the wounded working class. They turned a landslide into a close win, which the Electoral College then turned into a defeat. For what it’s worth, I also blame our country’s apparent indifference toward racism and sexism. I’m not sure that either one of them drove a large number of votes, but there’s no question that a big chunk of America looked at a voraciously racist and misogynistic campaign from Donald Trump and decided to shrug it off. It just wasn’t important to them. That’s as disheartening as anything else that happened this year.

1Some of you anyway. Honestly, it’s not deliberate on my part. As best I can tell, this is just what the data tells us.

2There’s no universally accepted definition of working class. For our purposes, it’s anyone without a college degree.