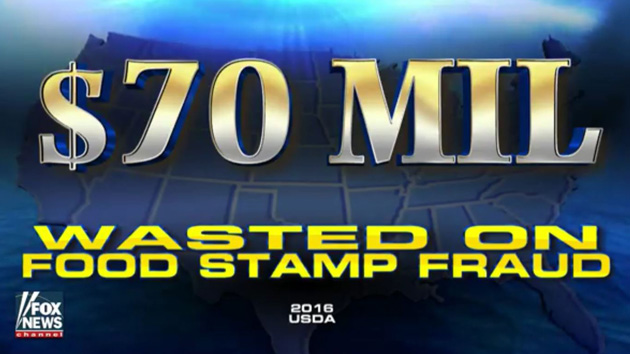 This post starts out in an all-too-familiar way: with a Fox News headline. Here it is:

Food Stamp Fraud at All-Time High: Is It Time to End the Program?

Now, the obvious response to this is twofold. First, they’re just lying, aren’t they? And second, this is like a headline that says, “Traffic Deaths at All-Time High: Should We Ban Cars?”

But at this point the story takes a strange turn. First, I have no idea where Fox’s $70 million figure comes from—and I looked pretty hard for it. The Fox graphic attributes it to “2016 USDA,” but as near as I can tell the USDA has no numbers for SNAP fraud more recent than 2011.1

But that’s not all: $70 million is a startlingly low figure. In the most recent fiscal year, SNAP cost $71 billion, which means that fraud accounted for a minuscule 0.098 percent of the program budget. Even if this is an all-time high, the Fox high command can’t believe this is anything but a spectacular bureaucratic success.

And it would be, if it were true. But it’s not. If you look at inaccurate SNAP payments to states, the error rate since 2005 has decreased from 6 percent of the budget to less than 4 percent. However, this isn’t fraud anyway: It’s just an error rate, and most of the errors are eventually corrected. SNAP “trafficking”—exchanging SNAP benefits for cash—is fraud, but it’s been declining steadily too, from 3.8 percent in 1993 to 1.3 percent in 2011 (the most recent year for which we have records):

So in any normal sense, the Fox story was a lie. SNAP fraud isn’t at an all-time high. It’s been declining for years. But here’s the thing: The fraud rate in 2011 may have been low, but this was in the aftermath of the Great Recession, when total SNAP payments were very high. So although the percentage is low, the dollar value of fraud clocked in at $988 million. Fox could have used this far higher number, which is, in fact, an all-time high. It’s only an all-time high because SNAP was helping far more people, but still. In the Fox newsroom, that would hardly matter.

Bottom line: Yes, Fox is lying in any ordinary sense of the word. But they’re also vastly understating the amount of SNAP fraud. Even when they’re trying to deceive their audience, it turns out, they’re also incompetent.