Over at National Review, Tim Alberta ponders “Conservatism in the Era of Trump.” It’s not a pretty picture. There’s no one more conservative than the House Freedom Caucus, 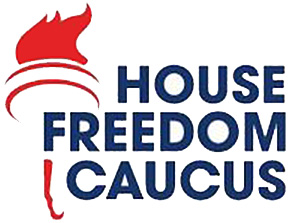 but they’ve already started to cave in to Trumpism:

Consider Trump’s stated intention to seek a $1 trillion dollar infrastructure package soon after taking office. At a conservative forum one week after the election, [Raul] Labrador told reporters that any such bill “has to be paid for” with spending cuts or revenues from elsewhere…But their thinking has shifted in the weeks since. According to several members, there has been informal talk of accepting a bill that’s only 50 percent paid for, with the rest of the borrowing being offset down the road by “economic growth.” It’s an arrangement Republicans would never have endorsed under a President Hillary Clinton, and a slippery slope to go down with Trump.

This is in addition to the tax cuts for the rich, which won’t be paid for at all. But why is the HFC already bending its adamantine principles against increasing the deficit? What are they afraid of? Rachael Bade tells us:

Since the election, numerous congressional Republicans have refused to publicly weigh in on any Trump proposal at odds with Republican orthodoxy, from his border wall to his massive infrastructure package. The most common reason, stated repeatedly but always privately: They’re afraid of being attacked by Breitbart or other big-name Trump supporters.

“Nobody wants to go first,” said Rep. Mark Sanford (R-S.C.), who received nasty phone calls, letters and tweets after he penned an August op-ed in The New York Times, calling on Trump to release his tax returns. “People are naturally reticent to be the first out of the block for fear of Sean Hannity, for fear of Breitbart, for fear of local folks.”

ZOMG! Phone calls, letters, and tweets, oh my! Who would have guessed that militant conservatives were so spineless? Here’s some news: I don’t get many phone calls, but I get lots of nasty emails and tweets too. So does everyone who comments on or practices politics. That’s America these days.

People often comment about how easily groups like Nazis and fascists came to power. This is how. But hell, at least in Germany and Italy people were cowed by real threats of real violence. It’s not especially heroic, but it’s understandable. In America, we’re heading down that path because people are afraid of unpleasant tweets.