The Wall Street Journal ran a piece yesterday about the folks who (accidentally) created the 401(k) retirement plan. They aren’t happy with their creation:

Many early backers of the 401(k) now say they have regrets about how their creation turned out despite its emergence as the dominant way most Americans save. Some say it wasn’t designed to be a primary retirement tool and acknowledge they 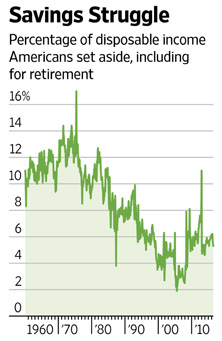 used forecasts that were too optimistic to sell the plan in its early days.

Others say the proliferation of 401(k) plans has exposed workers to big drops in the stock market and high fees from Wall Street money managers while making it easier for companies to shed guaranteed retiree payouts.

The Journal piece is accompanied by the chart on the right, showing the decline of the personal saving rate over the past few decades. It looks pretty bad. Just as old-style pensions were going away, Americans were saving less and less, including their savings in 401(k) accounts. Retirement is now a hellhole, just a grim march from retirement to death subsisting on cat food.

But let me show you another chart. There’s more than one way to save, it turns out. For example, you can build up equity in your home. And as housing prices have risen over the past several decades, so has total personal wealth:

Even this number is down since the 80s, but a drop from 103 percent to 98 percent doesn’t seem all that scary, does it? And it’s worth remembering that housing wealth has long played a role in retirement, as retired homeowners either sell their houses, downsize their houses, or take out a reverse mortgage on their houses.

Now, this hardly tells the whole story. The truth is that there are good and bad aspects to both old-style pensions and 401(k) plans. Here are a few:

I’ve written about this in more detail before, most recently here. Advantages of 401(k) plans over traditional pensions are here. The bottom line is that 401(k) plans aren’t perfect, and we could stand to make more changes to them. I’d like to see hard caps on management fees, for example. Nonetheless, on average, old-style pensions weren’t all that great either, and 401(k)s are getting better. I’m all for further reforms, and I’m all for expanding Social Security for the bottom third. But taken as a whole, 401(k) plans aren’t bad, and as the 2006 reforms continue to make a difference, they’re going to get better.