Generally speaking, the Supreme Court is reluctant to weigh in on gerrymandering cases. There are exceptions, primarily where race is a factor, but for the most part they take the view that legislative redistricting is a political question, not a legal one. If a majority party gerrymanders a state to improve its chances in subsequent elections, that’s just politics red in tooth and claw.

But there’s another reason that courts shy away from gerrymandering cases: there’s no obvious judicial standard to use. If they did rule that gerrymandering was illegal or unconstitutional, they’d have to provide some kind of guidance about what’s acceptable and what’s not. But what would that be? Some weird topographical algorithm? Something relating partisan breakdowns in individual districts to the overall partisan breakdown of the state? Neither of these would work, and the lack of an easily justiciable rule means it’s unlikely the Supreme Court would ban gerrymandering even if it did decide it was a legal issue.

But it turns out there is a rule that can be applied easily and fairly. I’ve had this in an open tab for weeks, and it’s time to either close the tab or share the insight. So here it is:

….But as Justice Scalia pointed out in his Vieth opinion, parties do not have a right to equal representation, any more than any other social group. It is only individual voters who have a right to equal treatment under the 14th Amendment and Article 1 of the Constitution….In our book, we show that the partisan symmetry standard can be logically derived from the equal treatment of individual voters, based on recent results in social choice theory. In partisan elections, you cannot treat all individual voters equally without treating all parties equally. This means that the party that gets more votes must get more seats. This sounds obvious, but it is precisely what the Supreme Court did not accept in the Vieth case. We show — line by mathematical line — that this logic is inescapable.

We live in an era of brute-force, computer-driven gerrymandering, which produces results like this: 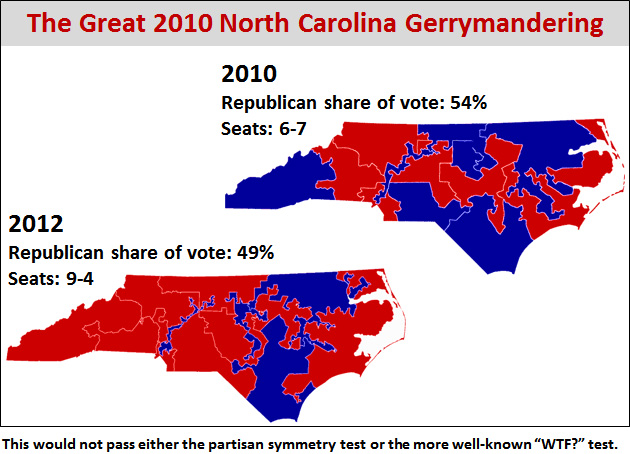 But if gerrymandering is now a brute-force, computer-driven activity, the best answer is a brute-force computer-driven rule. A few decades ago, applying the partisan symmetry rule would have been all but impossible, but today it’s easy. It’s also something that can be easily defined, and is therefore pretty easily managed by the courts.

In the past, gerrymandering was a problem, but it was a modest one. Computers have changed all that. Anyone can now produce a map gerrymandered beyond anyone’s imagination as recently as 30 years ago. That makes it a much bigger problem and a much bigger source of electoral unfairness. The Supreme Court will have a chance to revisit the issue later this year, and they should think very hard about how technology has affected the ancient art of gerrymandering.