Is bipartisanship coming back into style? With Republicans hopelessly divided, Reince Priebus suggested this morning that maybe it was time to work with Democrats on health care reform:

“I think it’s time for our folks to come together,” Mr. Priebus said, adding that it is time to “potentially get a few moderate Democrats on board, as well” as they try to bring down premiums and stabilize insurance markets.

That appeal was echoed by Senator Susan Collins of Maine, a moderate Republican who opposed the House Republicans’ health bill and has also worked with Democrats to explore changes to the Affordable Care Act without repealing it.

I don’t know if this is just wishful thinking, but there might be a deal to be made here. Obamacare has a number of smallish problems but only one big one: Its insurance pool is unbalanced, with too many older-sicker (OS) customers and too few younger-healthier (YH) customers. Insurers expected differently back in 2013, which is why they priced their policies too low at first, eventually leading to big premium increases last year. It’s also why several insurers have pulled out of the Obamacare market entirely. Fix the pool, and you fix a bunch of other problems at the same time.

So how do we get more YH folks to buy insurance? There are carrots and sticks, and the biggest stick is to strengthen the individual mandate by increasing the tax penalty for not buying insurance (and tightening up enforcement). However, the individual mandate is the single most hated part of Obamacare among Republicans, so there’s not much chance of doing anything there. At the same time, we also can’t replace the mandate with Trumpcare’s continuous coverage provision, since the CBO seems pretty convinced that this would decimate the market. Basically, this has to be left alone.

But what about carrots? The best way of attracting more YH customers is to make policies cheaper for them. There are several ways of doing this, but one way would be to combine the income-based subsidies of Obamacare with the age-based subsidies of Trumpcare. Something like this:

This would probably be more popular than Obamacare’s current subsidies, since middle-class workers would at least get something to help them out with insurance even if they made too much money to qualify for today’s income-based subsidies. Nobody would be left out completely. Here’s a rough guess at how this would look for a single individual: 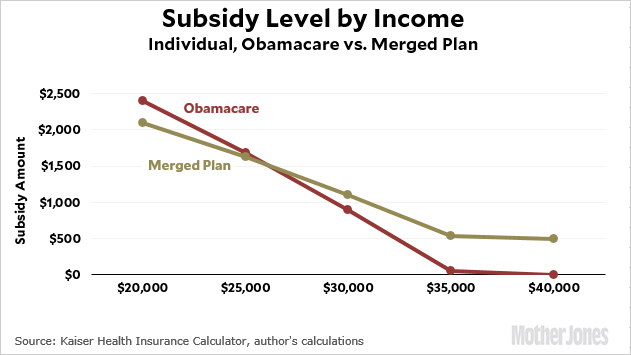 Obviously there would be winners and losers here. Somebody with a detailed model would need to analyze this, but my horseback guess is that the overall changes would be fairly modest. Still, if the middle class gets a bigger share, the poor will get a smaller share. Likewise, if the young get a bigger share thanks to the widened age band, the old will get less. There’s no way around that arithmetic unless Republicans are willing to increase the total subsidy level. But these are concessions that might be worth making.

What else? We have to leave the taxes in place, but Republicans seem to have a real issue with the medical devices tax. Democrats could agree to get rid of it. Maybe the employer mandate could also be repealed, since it doesn’t seem to be all that necessary.

The devil, as always, is in the details, and there are other issues with Obamacare that could be shored up too. But balancing the pool is really the biggest one, and adopting a compromise between Obamacare and Trumpcare might do a workable job of fixing that.

Could this happen? Republicans, as we know, are averse to compromise of any sort because it brings instant charges of selling out from the true believers. But the true believers aren’t very popular right now, so maybe Republicans would be willing—even eager!—to use this as a chance to take them down a peg. Among Democrats, the biggest opposition to a deal is going to come from people who don’t want to give Donald Trump a victory of any kind. But for a chance to stabilize a program they’ve spent decades trying to get passed, they might be willing to talk.

Bipartisanship is in poor odor these days, so maybe this is all just pie in the sky. But it’s at least worth investigating. After all, we don’t need everybody on board, just 60 percent of each caucus. That might be doable.