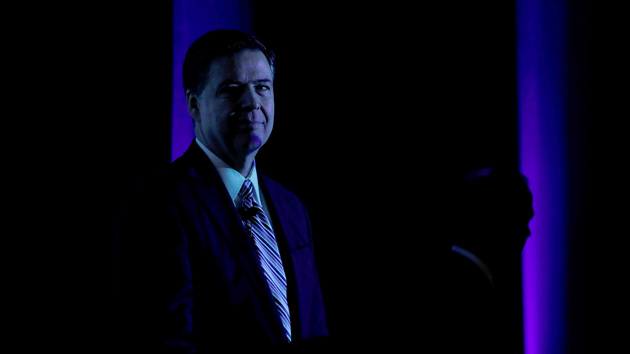 By coincidence, right after my Comey post yesterday morning the New York Times published a long tick-tock about how and why Comey did what he did. It doesn’t address the question of whether Comey tipped the election, it just provides an insider account of what was going through Comey’s head as he made decisions during campaign season.

It makes for depressing reading. The reporters conclude pretty strongly that Comey wasn’t driven by any conscious partisan motives. But even if that’s true, there were pretty clearly partisan and personal influences at work. Apologies in advance for the length of this post, but putting all six of the following excerpts together in a single narrative is the only way to show what really happened. The story begins two years ago when the FBI opened its probe into Hillary Clinton’s emails:

On July 10, 2015, the F.B.I. opened a criminal investigation, code-named “Midyear,” into Mrs. Clinton’s handling of classified information….Everyone agreed that Mr. Comey should not reveal details about the Clinton investigation. But [attorney general Loretta Lynch] told him to be even more circumspect: Do not even call it an investigation, she said, according to three people who attended the meeting. Call it a “matter.”

….It was a by-the-book decision. But Mr. Comey and other F.B.I. officials regarded it as disingenuous in an investigation that was so widely known. And Mr. Comey was concerned that a Democratic attorney general was asking him to be misleading and line up his talking points with Mrs. Clinton’s campaign, according to people who spoke with him afterward.

This seems to have been the starting point. Even when Justice Department officials were making straightforward, “by-the-book” decisions, Comey was paranoid that they were acting to protect a Democrat—something that obviously might invite Republican attack if he went along. This belief continued to grow, and led to much of what happened later, when the investigation was wrapping up:

Early last year, F.B.I. agents received a batch of hacked documents, and one caught their attention. The document, which has been described as both a memo and an email, was written by a Democratic operative who expressed confidence that Ms. Lynch would keep the Clinton investigation from going too far, according to several former officials familiar with the document.

Read one way, it was standard Washington political chatter. Read another way, it suggested that a political operative might have insight into Ms. Lynch’s thinking.

Normally, when the F.B.I. recommends closing a case, the Justice Department agrees and nobody says anything….The document complicated that calculation, according to officials. If Ms. Lynch announced that the case was closed, and Russia leaked the document, Mr. Comey believed it would raise doubts about the independence of the investigation.

This email wasn’t related to Lynch or her office in any way. It was just gossip from a third party. But instead of ignoring it, Comey worried that it might leak and hurt his own reputation. This also motivated his decision, when the investigation was over, to hold an unusual press conference which damaged Clinton seriously even though he cleared her of wrongdoing:

Standing in front of two American flags and two royal-blue F.B.I. flags, he read from a script….“Any reasonable person in Secretary Clinton’s position” should have known better, Mr. Comey said. He called her “extremely careless.” The criticism was so blistering that it sounded as if he were recommending criminal charges. Only in the final two minutes did Mr. Comey say that “no charges are appropriate in this case.”

….By scolding Mrs. Clinton, Mr. Comey was speaking not only to voters but to his own agents. While they agreed that Mrs. Clinton should not face charges, many viewed her conduct as inexcusable. Mr. Comey’s remarks made clear that the F.B.I. did not approve.

Former agents and others close to Mr. Comey acknowledge that his reproach was also intended to insulate the F.B.I. from Republican criticism that it was too lenient toward a Democrat.

Again, Comey had failed to play it straight. Even though the decision to exonerate Clinton “was not even a close call,” as he later said, he tore into Clinton in order to protect himself from criticism—both from Republicans and from his own agents. This is especially damning given the subsequent evidence that Comey’s criticism of Clinton was wildly overstated. The same dynamic played out in reverse a couple of months later over the FBI investigation into Donald Trump and Russian interference in the election:

Mr. Comey and other senior administration officials met twice in the White House Situation Room in early October to again discuss a public statement about Russian meddling….At their second meeting, Mr. Comey argued that it would look too political for the F.B.I. to comment so close to the election, according to several people in attendance. Officials in the room felt whiplashed. Two months earlier, Mr. Comey had been willing to put his name on a newspaper article; now he was refusing to sign on to an official assessment of the intelligence community.

And it played out yet again in September, when agents discovered some Clinton emails on Anthony Weiner’s laptop. Michael Steinbach, a former FBI agent who worked closely with Comey, explained what went through Comey’s mind:

Agents felt they had two options: Tell Congress about the search, which everyone acknowledged would create a political furor, or keep it quiet, which followed policy and tradition but carried its own risk, especially if the F.B.I. found new evidence in the emails.

….Conservative news outlets had already branded Mr. Comey a Clinton toady. That same week, the cover of National Review featured a story on “James Comey’s Dereliction,” and a cartoon of a hapless Mr. Comey shrugging as Mrs. Clinton smashed her laptop with a sledgehammer.

Congressional Republicans were preparing for years of hearings during a Clinton presidency. If Mr. Comey became the subject of those hearings, F.B.I. officials feared, it would hobble the agency and harm its reputation. “I don’t think the organization would have survived that,” Mr. Steinbach said.

Once again, the primary concern was protecting Comey and the FBI. Republicans had made it clear that their retribution against anyone who helped Clinton would be relentless, and that clearly had an impact on Comey. Steinbach’s suggestion that Republican vengeance would have destroyed the FBI is clearly nuts, but Comey was taking no chances. He didn’t want the grief.

Even after it was all over, Comey’s partisan influences continued to work on him:

Officials and others close to him also acknowledge that Mr. Comey has been changed by the tumultuous year.

Early on Saturday, March 4, the president accused Mr. Obama on Twitter of illegally wiretapping Trump Tower in Manhattan. Mr. Comey believed the government should forcefully denounce that claim. But this time he took a different approach. He asked the Justice Department to correct the record. When officials there refused, Mr. Comey followed orders and said nothing publicly.

Daniel Richman, a longtime friend of Comey’s, said this represented “a consistent pattern of someone trying to act with independence and integrity, but within established channels.”

The evidence does indeed show consistent behavior, but of a different kind. At every step of the way, Comey demonstrated either his fear of crossing Republicans or his concern over protecting his own reputation from Republican attack. It was the perfect intersection of a Republican Party that had developed a reputation for conducting relentlessly vicious smear campaigns and a Republican FBI director who didn’t have the fortitude to stand up to it. Comey may genuinely believe that his decisions along the way were nonpartisan, but the evidence pretty strongly suggests otherwise.