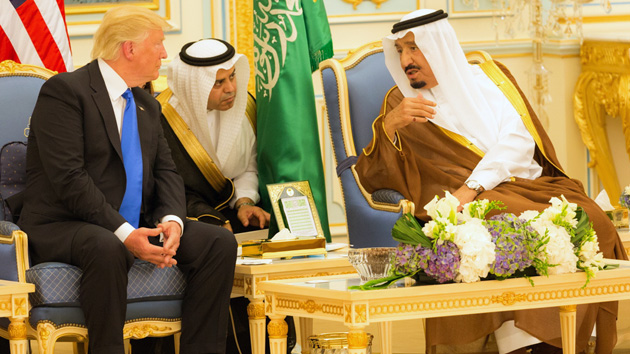 Last year, President Obama offered Saudi Arabia an arms deal worth $115 billion. President Trump just closed a deal valued at only $110 billion. He’s also spoken viciously about Islam on the campaign trail and tried to ban the entry of visitors from seven Muslim countries. And yet the Saudis are thrilled to have Trump in office. Why? Molly Hennessy-Fiske explains:

The White House they see now is presided over by a strong leader — a model Gulf monarchs recognize from their own governing styles — and if Trump surrounds himself with business-friendly family members high in his administration, well, so do they.

….“The GCC countries are not only excited about Trump, but the people he’s chosen to have around him,” said Alibrahim, who dismissed Obama as “the worst president ever,” unwilling to confront Iran and its Shiite Muslim proxies in Syria and neighboring Yemen, whom the Sunni leaders of the Gulf see as rivals.

….“Trump is a welcome change from Barack Obama because he does not remind them, does not pressure them, about American values and ideas about human rights and democracy. This president is a hardcore realist: He just doesn’t care. This goes well with many leaders in this part of the world,” Gerges said.

Trump has already impressed Gulf Arab leaders by escalating the war against Islamic State militants in Iraq and Syria and supporting the Saudi fight against Houthi rebels in Yemen.

As far as Saudi Arabia is concerned, Trump’s anti-Muslim rabble-rousing is just red meat for the American rubes. They don’t take anything Trump says seriously, only what he does. And what’s clear is that (a) Trump’s personal brand of corruption is reassuringly Middle Eastern, (b) he hates Iran, (c) he’s not going to harass the Saudis over trivia like human rights, and (d) he doesn’t care how brutal they get in their war against the Houthi rebels in Yemen.

That’s it. That’s all they care about. Trump isn’t bringing in more business and he’s not selling them more arms. Nor is his actual policy toward Iran and Yemen more than a few degrees different from Obama’s. He’s just carrying it out with no strings attached. They like that.