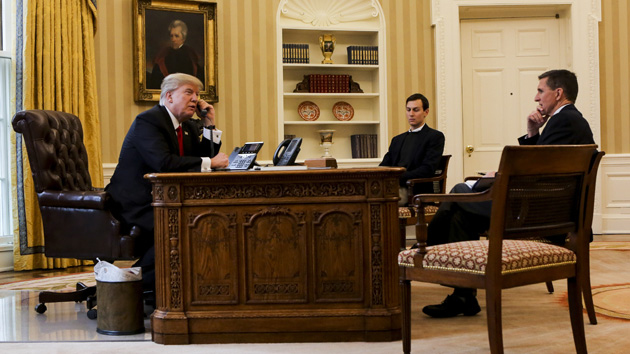 Last night the Washington Post and the New York Times both reported that Jared Kushner buttonholed the Russian ambassador last December about setting up a secret communications backchannel with Moscow. This was during the transition period, six or seven weeks before Trump was inaugurated. The stories differ in the details they provide:

The White House has not denied this story. It has simply refused to comment.

What do we make of this? Even after pondering it for several hours, I’m not sure what to think. I assume the Post has good sources for its report that Kushner wanted to use Russian embassy facilities, which suggests he was looking for a channel that was safe from monitoring—and leaking—by American intel agencies. In fact, the Post directly asserts this. But if the Times is right about Syria, that doesn’t make sense. There have been a lot of leaks recently, but not last December. And certainly there was no reason to suspect that any intel agency would leak conversations about Syria.

So maybe they really wanted to talk about something else. But what? It would need to be something that was (a) highly sensitive, and (b) dodgy enough that some do-gooder in the intel community might feel like it needed to be leaked. There’s been plenty of speculation about what that could be, but nothing grounded in reporting.

Also unknown: did Trump know about this? Or were Kushner and Flynn freelancing?

Also: what was the rush? In a few weeks Trump would have access to all the secure comms he wanted. Why was it so urgent to have galactic-class secure comms right away?

And: who wrote the anonymous letter that first tipped off the Post in mid-December?

The whole thing will remain something of a mystery until we know more about it. However the Post reports that the Russian ambassador was taken aback by Kushner’s naivete in thinking that Russia might agree to expose its embassy facilities to an American. Subsequent commenters have used stronger terms than naivete.

Also, everyone agrees that Kushner’s multiple meetings with various Russians were withheld from his security clearance application. That’s not good.