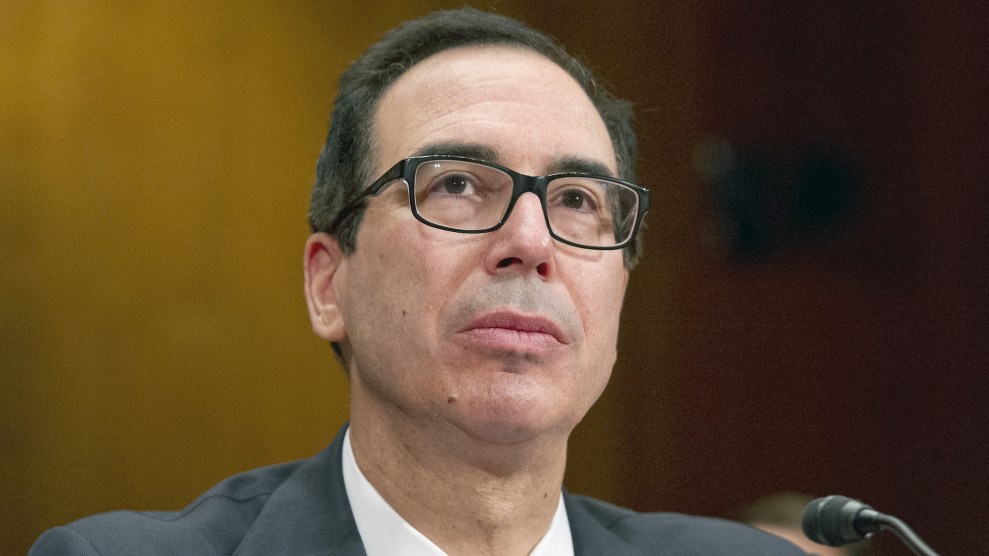 As Republicans have taken to the airwaves to push their new tax plan, they’ve claimed their cuts will trigger stunning economic growth—and thereby bring in more tax revenue than they expect to lose from the cuts. It’s a classic line from supply-side economics backing Republicans, eager to justify tax cuts by promising growth and tax gains that, history has shown, will never come.

On Thursday, Treasury Secretary Steven Mnuchin stepped up to the plate, promising a revenue boom that could go to deficit reduction: “We think there will be $2 trillion of growth so we think this tax plan will cut down the deficit by a trillion dollars,” he said. “That’s a large number.”

Unfortunately for Mnuchin, hardly anyone credible believes him. The nonpartisan Committee for a Responsible Federal Budget said the Republican tax framework released on Wednesday could add $2.2 trillion in deficit spending by handing out tax cuts “like Halloween candy.”

“Deficit-financed tax cuts are a recipe for a short-term economic sugar high followed by sluggish long-term growth,” Maya MacGuineas, the group’s president, warned in a statement.

Bruce Bartlett, who, as a former domestic policy adviser to Ronald Reagan, says he helped enshrine the very notion that cuts benefit the economy as part of “the Republican tax myth,” wrote on Thursday that “there’s no evidence that a tax cut now would spur growth.”

As Bloomberg columnist Noah Smith makes clear, almost all economists side with Bartlett and MacGuineas. In May, the IGM Forum at the University of Chicago’s Booth School of Business surveyed dozens of top economists on whether a similar Trump tax plan would pay for itself through economic growth. After factoring in the economists’ confidence, over four-fifths strongly disagreed that it would.

They were also asked a question essential to Mnuchin’s prediction that Trump’s tax cuts will, in the end, lead to deficit reduction. The economists were surveyed if, in general, previous tax plans relying on substantial future economic growth turned out, as you might expect they would, to bring in less money.

None disagreed that they had.

Perhaps Republicans’ favorite example from history is Ronald Reagan’s 1986 tax cut. On Wednesday, House Speaker Paul Ryan cited those cuts, claiming that they had given Americans a tax system they to be proud of. But the most comprehensive analysis of the Reagan cuts suggests they didn’t lead to economic growth. The next year, the Dow Jones dropped by 22 percent in one day, the largest crash in US history.

Mnuchin has held fast in defending the administration’s use of optimistic growth projections when calculating tax reform’s impact. When CNBC asked him whether the administration’s plan would be revenue neutral, Munchin offered a telling response, hinting at the the friendly math they would rely on: “It depends on how you score it…under our models, we are absolutely committed to revenue neutrality.”