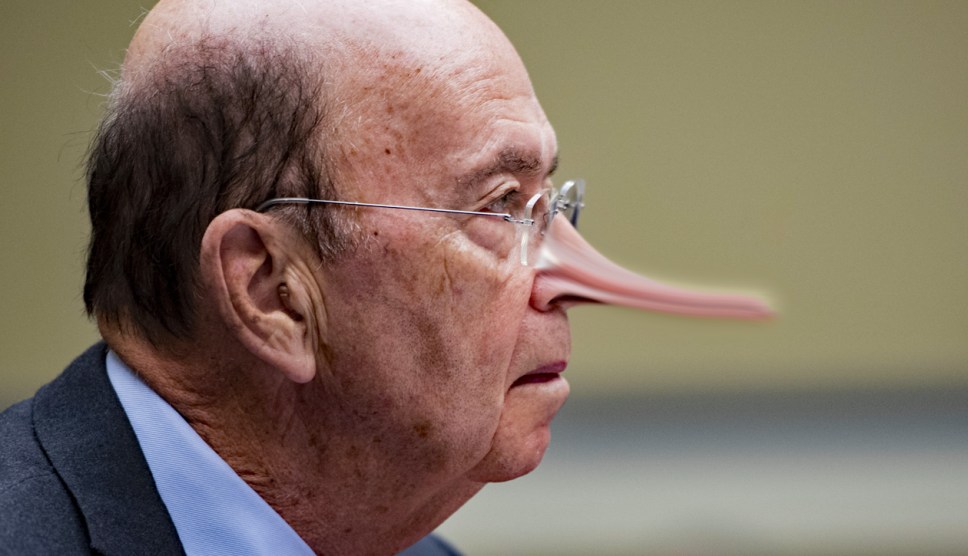 Oh man, I almost forgot about this. Remember the other day I mentioned that Commerce Secretary Wilbur Ross is a multi-billionaire? Funny story about that.

It turns out that in his financial disclosure to Congress, his net worth only amounted to about $700 million. Forbes asked him about this, and Ross said it was because he had put about $2 billion into family trusts that he didn’t have to disclose:

So began the mystery of Wilbur Ross’ missing $2 billion. And after one month of digging, Forbes is confident it has found the answer: That money never existed. It seems clear that Ross lied to us, the latest in an apparent sequence of fibs, exaggerations, omissions, fabrications and whoppers that have been going on with Forbes since 2004. In addition to just padding his ego, Ross’ machinations helped bolster his standing in a way that translated into business opportunities. And based on our interviews with ten former employees at Ross’ private equity firm, WL Ross & Co., who all confirmed parts of the same story line, his penchant for misleading extended to colleagues and investors, resulting in millions of dollars in fines, tens of millions refunded to backers and numerous lawsuits. Additionally, according to six U.S. senators, Ross failed to initially mention 19 suits in response to a questionnaire during his confirmation process.

….Ross’ questionable assertions to Forbes, combined with a recent controversy about a multimillion-dollar stake in a shipping company that does big business with close associates of Vladimir Putin, paint a clearer picture of the commerce secretary’s tactics….“Wilbur doesn’t have an issue with bending the truth,” says David Wax, who worked alongside Ross for 25 years and served as the No. 3 person in his firm. Another former colleague, who requested anonymity, was less circumspect: “He’s lied to a lot of people.”

Wilbur Ross sounds like a man who really fits into Donald Trump’s cabinet, doesn’t he? He lies a lot. He pretends he has more money than he does. He has oddly unexplained ties to Russian tycoons. He loves trade barriers. He apparently has a titanic but fragile ego. I wonder who recommended this guy to Trump?

Oh, and the whole Forbes piece is well worth a read. Ross is really quite the guy.