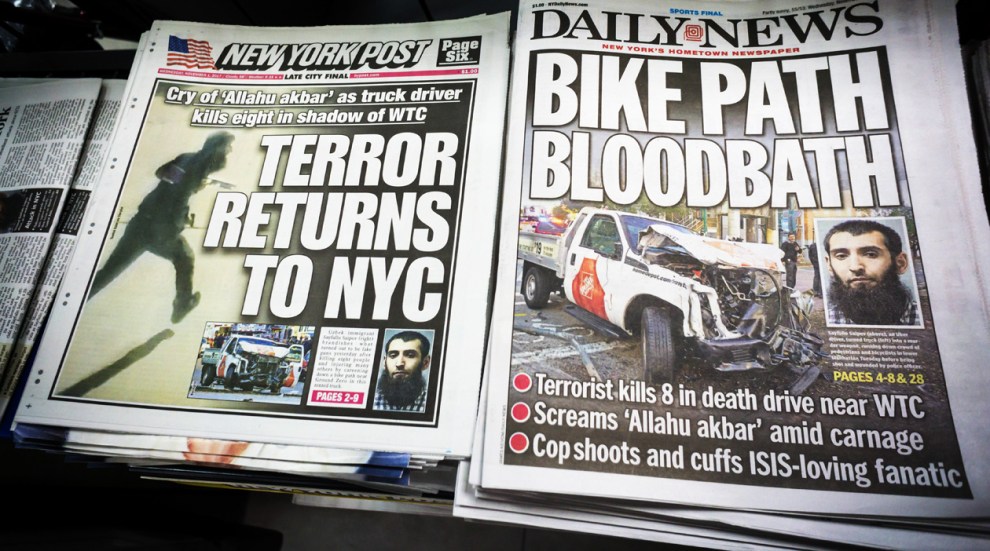 Just for the record, I have no problem with politicizing tragedy. There are limits, of course. Everyone should be sensitive toward the families of the victims, for example, and the general life rule of “don’t be an asshole” probably applies a little more strongly than it does all the rest of the time.

Jonah Goldberg, however, is on the other side:

Right now, Twitter is full of conservatives rightly mocking Schumer and other Democrats for their hypocrisy. Schumer & Co. had no problem with instantaneous demagoguery on guns and the need for gun control after the Las Vegas shooting (or countless other mass murders before that). But now that the issue is immigration, they are aghast that anyone would use a tragedy to push a policy agenda or score political points.

But what about conservatives doing exactly what we decry as well? When it’s gun control, we’re all like, “How dare you politicize a tragedy?” This was the White House’s official position in the wake of the Las Vegas shooting. “Now is not the time” etc.

Are we to think that when the blood in the street bolsters the case for even more Extreme Vetting, it’s just fine?

This is an honest question: Is there a meaningful distinction between the two scenarios? Are there some policy questions that are fair in the wake of a terror attack or mass shooting and others that must be held in check pending a respectful mourning period? Or is “propriety for thee, but not for me” the rule now?

I’m sure Tucker Carlson or someone will invent some reasons why terrorism by Muslims is totally different from terrorism by some white guy, but I think the rest of us can dismiss it in advance. The best answer, I think, is just to accept that pushing for political change in response to a tragedy is OK. You can do it well or badly, just like you can any other time, but there’s no reason not to do it.

If there’s anything that does irk me about today’s ragetweets from the White House politicizing yesterday’s terror attack, it’s the certain fact that before this morning President Trump had never heard of the Diversity Visa Lottery or cared about it.¹ But it’s nothing more than a program that ensures every region of the world has access to at least a few visas. It was created nearly three decades ago by Ted Kennedy—long before 9/11—and was passed by overwhelming bipartisan majorities. According to Wikipedia, “In 1990 the qualifying countries were as follows: Albania, Algeria, Argentina, Austria, Belgium, Czech republic, Slovakia, Denmark, Estonia, Finland, France (including Guadeloupe and New Caledonia), Germany, Great Britain and Northern Ireland (including Bermuda and Gibraltar), Hungary, Iceland, Indonesia, Ireland, Italy, Japan, Latvia, Liechtenstein, Lithuania, Luxembourg, Monaco, the Netherlands, Norway, Poland, San Marino, Sweden, Switzerland and Tunisia.”

That list of countries changed over the years to include many in the Middle East and central Asia. Four years ago Chuck Schumer tried to kill the program as part of a bipartisan immigration plan, but after passing the Senate it failed in the Republican-controlled House. So comprehensive immigration reform went down and the diversity visa program stayed around. Not that this matters since Sayfullo Saipov, who ran down and killed eight people yesterday in New York City, was admitted to the US several years before Congress began considering immigration reform.

Still, if Trump wants to use yesterday’s tragedy to push for stronger vetting of immigrants, he should go right ahead. I have no problem with this. He just needs to get his facts right.

¹FWIW, neither had I.