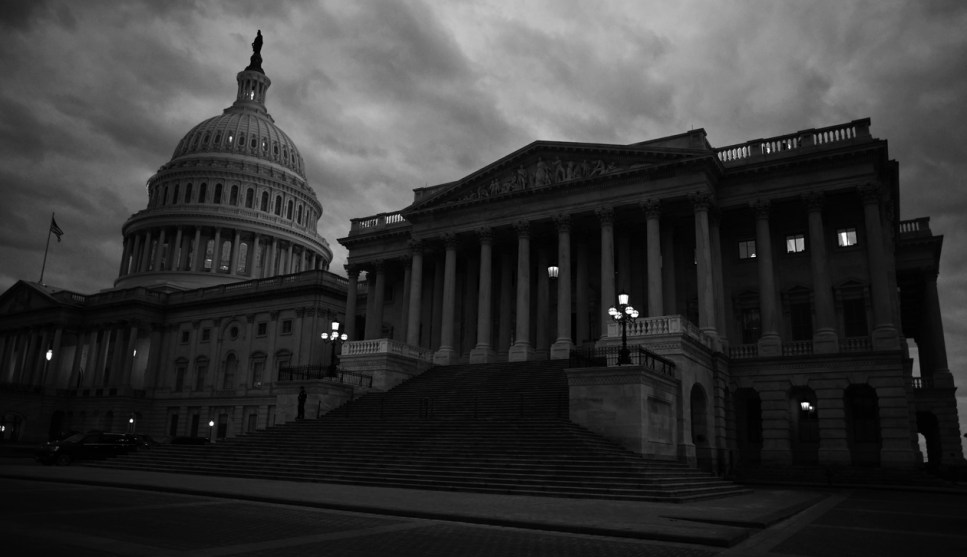 “Why aren’t you writing anything about the shutdown?” The masses demand to know what’s up. Well, I’ve been busy with some other stuff this weekend, and anyway, I’m not even sure what to say.

Let’s start with an obvious point: any government shutdown is the result of disagreements between Democrats and Republicans. In that sense, it’s not really anyone’s “fault.” Either side could cave at anytime if they really wanted the government to start running again.

That said, the question of who bears most of the fault for the current shutdown depends on who’s making the more outrageous demands. I can’t pretend to be neutral about this, but let’s roll the tape.

Republicans control Congress, but this year they never even came close to passing a budget because they were too busy failing to repeal Obamacare and enacting big tax cuts for corporations. Democrats, for reasons best left unexamined, gave Republicans the headroom to do this by agreeing to multiple continuing resolutions that would keep the government running in the meantime. All along, however, Democrats had one demand: that the eventual budget include language that restored DACA, the “mini-DREAM” act that Donald Trump killed. Eventually, they said, they’d stop voting for more CRs that didn’t include DACA. And so they did. Republicans have known this for months.

Now, Republicans are allegedly in favor of restoring DACA too, so the easy solution would have been to include it in the latest CR, perhaps along with some kind of concession from Democrats on military spending. All done, and then everyone can get down to the serious work of writing real appropriations bills. Needless to say, that didn’t happen.

I’ll confess up front that I don’t know precisely what DACA demands Democrats are making, but I don’t think they’ve moved the goalposts on this noticeably. They just want DACA. So do Republicans. So does the vast majority of America.

So what are Republicans demanding in return? Unfortunately, it’s all but impossible to figure that out. At first it was a few restrictions on chain migration and some money for border security. Democrats were willing to work with this, and Donald Trump said he’d sign anything Congress sent him, even if he didn’t like it that much.

But then Trump changed his mind and decided the bill should contain an almost complete wishlist of Republican demands from past immigration negotiations. This was faintly ridiculous, since Democrats would certainly want more in return for all that than merely DACA. Nonetheless, Dems were willing to compromise and accept much of this. Once again Trump seemed amenable. And once again he changed his mind after Stephen Miller and Tom Cotton got to him. Mitch McConnell threw up his hands, saying he couldn’t really do anything until he knew what Trump wanted, and Paul Ryan maintained a studious silence. And then the government shut down.

From a PR standpoint, Democrats have a positive message: we just want protection for Dreamers. That’s very popular. But Republicans have one too: Democrats are willing to shut down the government over illegal aliens. That also polls well. I don’t know how that will play out.

However, in terms of demands, it’s hard to see how anyone would think Democrats are being the outrageous ones. They want something that’s simple and reasonable (and popular); they’ve been consistent about what they want; and they’ve generally been open to compromise to get it done. Republicans, by contrast, have demanded concessions for something they supposedly support themselves; their demands have become ever more onerous over the past few weeks; the president keeps changing his mind about what he wants; and at this point literally no one knows what it would take to close a deal with Republicans. Democrats couldn’t cave in even if they wanted to.

Republicans even refused to pass a routine measure to keep paying the military during the shutdown, something that would have passed easily on a bipartisan basis. Why? So that when they go on TV to argue that Democrats are responsible for the shutdown, they can also blame Democrats for service members not getting paychecks.

Am I missing anything important here? Have Democrats raised the stakes in ways I’m not aware of? Have Republicans been more consistent in their demands than I’m giving them credit for? Why is this whole question even remotely debatable?