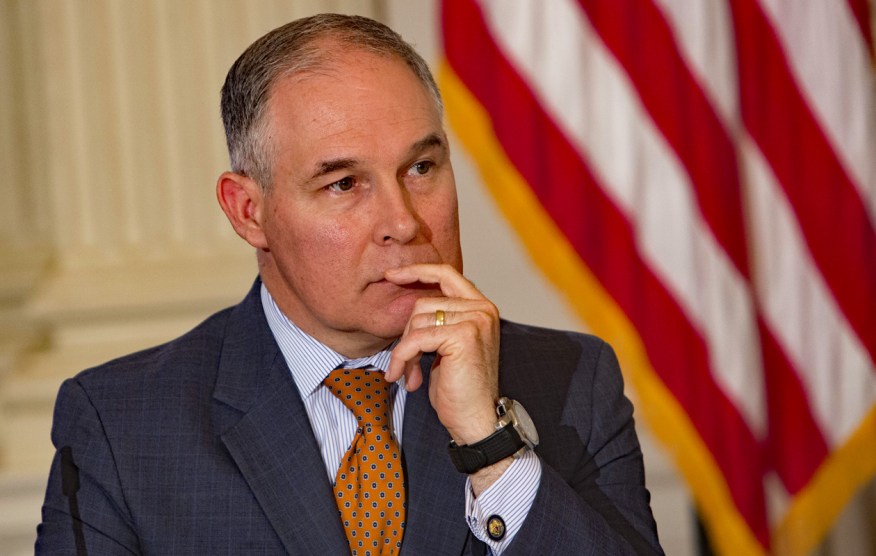 I don’t really care all that much whether EPA admnistrator Scott Pruitt flies in a blimp or an F-18. But the endless lying surrounding his official travel really grates. Yesterday, Politico reported that Pruitt’s story about getting a waiver to travel first-class was no longer operative:

EPA on Wednesday retracted its claim that Administrator Scott Pruitt has received a “blanket waiver” to fly first class whenever he travels, after POLITICO pointed officials to federal travel rules that appeared to bar such arrangements.

….GSA does allow first-class travel for security reasons, but only if agencies request a waiver for each trip. “As such, for every trip Administrator Pruitt submits a waiver to fly in either first or business class,” Wilcox said, amending the agency’s earlier statement, which yielded criticism from Republican lawmakers and led Democrats to request an inspector general investigation.

“Amending.” Uh huh. Originally the story was that Pruitt had received a blanket waiver. Then Politico pointed out this was illegal. So Pruitt just blandly changed his story to say that he had actually applied for a separate waiver for each trip.

So that’s that. They just make up any old story, and if it doesn’t work, they invent another one. Are any of them true? Who knows?

As for the story about Pruitt flying first-class for security reasons, well…

Henry Barnet, who directs EPA’s Office of Criminal Enforcement, Forensics and Training, said in an interview that the head of Pruitt’s security detail, Pasquale Perrotta, recommended in May that he fly in either first or business class to provide “a buffer” between him and the public. His memo was prompted by an incident that month when a person approached Pruitt “with threatening language” that was “vulgar,” Barnet said.

Nothing says “public servant” like spending thousands of dollars a year to provide a buffer against the public, amirite? In this case, there was no physical contact involved, just some vulgar language. Nor is it clear where this happened—on the plane? in the terminal? somewhere else?—or why flying first-class would prevent this anyway.

EPA only copped to this one incident, but also said that verbal insults have been “much more prevalent” with Pruitt than his predecessors. Really? Was this before the switch to first-class? How have things been since then?

Oh, and can you please release the waivers you say you’ve been submitting? And the report from the head of Pruitt’s security detail recommending first-class travel? And documentation about the incident in May? And all the rest of the alleged incidents?

No? Why am I not surprised?

UPDATE: In case you’re curious, the conservative Twitterati are totally OK with Pruitt’s first-class travel because we lefties are such dangerous psychopaths. Remember Steve Scalise? A Bernie bro! And Rand Paul? Never mind that the Paul incident was dispute over gardening etiquette, it just goes to show the danger that conservatives are in. So of course Pruitt has to fly first-class.