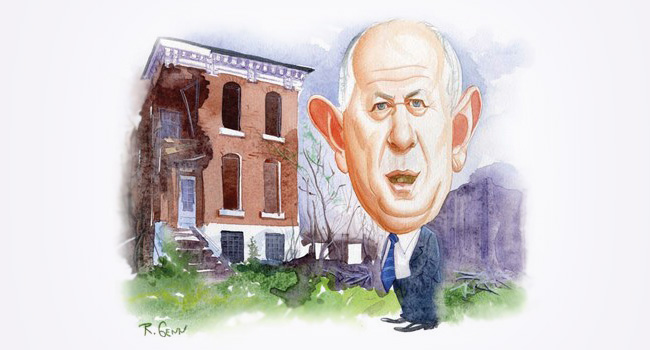 This is the artwork that ran above Williamson's piece. The artwork, like the story, focuses on Illinois Gov. Pat Quinn and alleged corruption in infrastructure spending. So why did the story start off with a gratuitous swipe at a black kid?Roman Genn/National Review

The Atlantic recently hired hardcore libertarian/conservative Kevin Williamson to be its newest columnist. Liberals are pissed. Partly this is because Williamson believes abortion is murder and therefore any woman who gets an abortion should be executed. This is typical of Williamson: he’s happy to say out loud things that plenty of other conservatives believe but are too smart to admit.

But Williamson also stands accused of racial insensitivity. His most often-quoted transgression is the first paragraph of a cover story he wrote for National Review in 2014. Here it is:

East St. Louis, Ill. — ‘‘Hey, hey craaaaaacka! Cracka! White devil! F*** you, white devil!” The guy looks remarkably like Snoop Dogg: skinny enough for a Vogue advertisement, lean-faced with a wry expression, long braids. He glances slyly from side to side, making sure his audience is taking all this in, before raising his palms to his clavicles, elbows akimbo, in the universal gesture of primate territorial challenge. Luckily for me, he’s more like a three-fifths-scale Snoop Dogg, a few inches shy of four feet high, probably about nine years old, and his mom — I assume she’s his mom — is looking at me with an expression that is a complex blend of embarrassment, pity, and amusement, as though to say: “Kids say the darnedest things, do they not, white devil?”

Describing a black boy as a “primate” is not a good look. But that’s not really the worst part of this paragraph. After all, it’s possible that Williamson didn’t realize this description was offensive. That’s not a great excuse, but it would speak mostly to cluelessness, not racism.

But here’s the thing. Williamson’s piece wasn’t about race. It was a fairly routine takedown of Democratic governor Pat Quinn prior to an upcoming election. It’s not even a very ideological takedown, focusing its spotlight mostly on alleged corruption in infrastructure spending. If Quinn had an R after his name, I could see myself writing almost exactly the same piece.

To me, this says more about the editorial process at National Review than anything else. If I had turned in this piece, my editors would have instantly flagged both the “primate” language and the fact that the whole paragraph served no purpose except to make black people look dull and irresponsible. I’m willing to bet there’s not a single person in the entire MoJo newsroom who lacks the minimal sensitivity needed to recoil from this. Hell, it made me recoil, and I’m hardly the wokest guy on the planet.

But at National Review—well, I don’t know. Do they simply have no one on staff who noticed this? Did they notice but give in to Williamson’s demand to keep it? Did they actively like it because they knew it would appeal to their readers? Was the first draft even worse and this is actually the toned-down version?

There’s no telling. The most sympathetic explanation is that they care so little about racial philistinism that they either didn’t notice or didn’t care that Williamson’s piece began with a gratuitous swipe at blacks. After that, the possible explanations all go downhill.