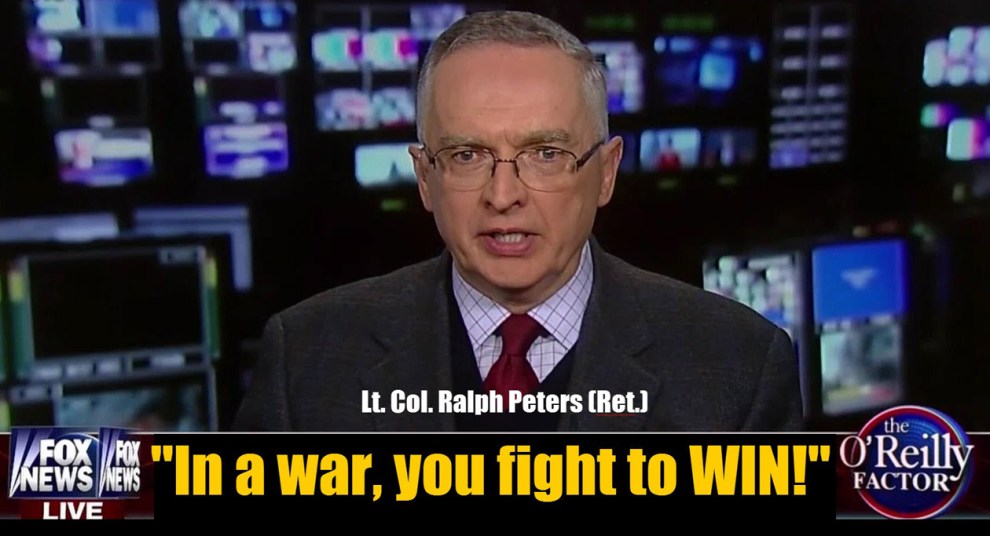 I’ve often wondered how long Republicans will tolerate President Trump’s war on the FBI. Conservatives love the FBI! It’s one thing to put up with Trump’s attacks on teachers or doctors or whoever else happens to catch his eye on a given day, but the FBI? Doesn’t that cause them at least a little bit of angst?

Funny you should ask. Lt. Col. Ralph Peters is a warmonger’s warmonger. As such, he fits in perfectly as a commentator on Fox News. But he’s finally decided he’s had enough and has decided to leave the network. Here’s his email explaining his resignation:

Over my decade with Fox, I long was proud of the association. Now I am ashamed. In my view, Fox has degenerated from providing a legitimate and much-needed outlet for conservative voices to a mere propaganda machine for a destructive and ethically ruinous administration. When prime-time hosts—who have never served our country in any capacity—dismiss facts and empirical reality to launch profoundly dishonest assaults on the FBI, the Justice Department, the courts, the intelligence community (in which I served) and, not least, a model public servant and genuine war hero such as Robert Mueller—all the while scaremongering with lurid warnings of “deep-state” machinations—I cannot be part of the same organization, even at a remove. To me, Fox News is now wittingly harming our system of government for profit.

As a Russia analyst for many years, it also has appalled me that hosts who made their reputations as super-patriots and who, justifiably, savaged President Obama for his duplicitous folly with Putin, now advance Putin’s agenda by making light of Russian penetration of our elections and the Trump campaign. Despite increasingly pathetic denials, it turns out that the “nothing-burger” has been covered with Russian dressing all along. And by the way: As an intelligence professional, I can tell you that the Steele dossier rings true—that’s how the Russians do things. The result is that we have an American president who is terrified of his counterpart in Moscow.

I could go on, but that would be boring. The point is this: He didn’t care about all that other stuff. After all, lying about liberals is fine. It’s only when Fox started lying about the FBI and Vladimir Putin that he got upset.

I’m breaking one of my rules here: I normally think that when someone finally has a change of heart, we should be grateful. There’s no point in hammering them because they haven’t become full-on Bernie bros, after all. Just welcome them to the fold. I believe this about Peters too, but it’s hard to contain myself when, after a decade of taking their money, he finally pretends to have just noticed that Fox News is a lunatic propaganda machine, not a news outlet.

Still, welcome to the land of reality, Col. Peters. Obviously I’m saying that grudgingly, but I still mean it. I just wish that attacks on your own personal hobbyhorses hadn’t been the only thing that could get you to see the light.