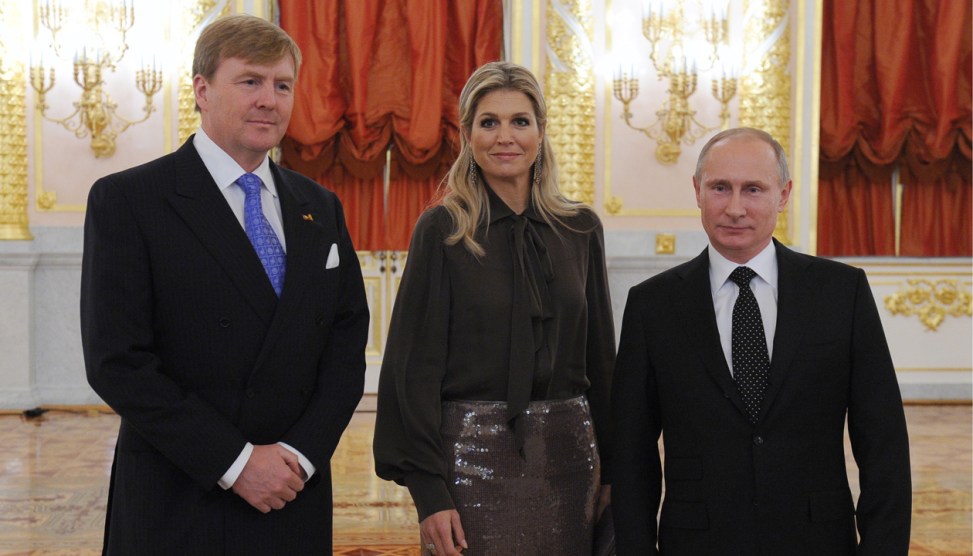 The king and queen of the Netherlands meet with Vladimir Putin the day before the Miss Universe pageant in 2013. Putin sure is short, isn't he? And King Willem-Alexander looks really thrilled to be meeting him, doesn't he?Mikhail Klimentyev/ITAR-TASS/ZUMAPRESS

Russian Roulette, by David Corn and Michael Isikoff, comes out next week, but we have the first of two excerpts today. There’s plenty of good stuff about Trump’s first forays into Russia, but my favorite is this one about his efforts to meet Vladmir Putin at the Miss Universe pageant in 2013:

Inevitably, the conversation turned toward Putin and whether he would appear at the pageant. “I know for a fact that he wants very much to come,” Trump said, “but we’ll have to see. We haven’t heard yet, but we have invited him.”

….By late afternoon, Trump’s anxiety was palpable. There had been no word. He kept asking if anybody had heard from Putin. Then Agalarov’s phone rang. “Mr. Peskov would like to speak to Mr. Trump,” Agalarov said. Trump and Peskov spoke for a few minutes. Afterward, Trump recounted the conversation to Goldstone. Peskov, he said, was apologetic. Putin very much wanted to meet Trump. But there was a problem nobody had anticipated: a Moscow traffic jam. King Willem-Alexander and Queen Maxima of the Netherlands were in town, and Putin was obligated to meet them at the Kremlin. But the royal couple had gotten stuck in traffic and was late, making it impossible for the Russian president to find time for Trump. Nor would he be able to attend the Miss Universe pageant that evening.

Here’s my question: did Trump actually believe this story? A traffic jam? That’s pretty much an intentional insult, isn’t it?

Anyway, this got me curious. As near as I can tell, the Dutch king and queen met with Putin on Friday, the day before the pageant. On the day of the pageant itself, the royals visited an art gallery; met with Dutch and Russian CEOs to discuss “strengthening trade between the two countries”; and then attended an evening concert, where a pair of activists pelted them with tomatoes. I can find no evidence that they met with Putin that day at all, let alone that a traffic jam held them up. So not only was Putin insulting Trump with a phony excuse, he made sure it was an excuse that was really obviously phony unless you’re an idiot.