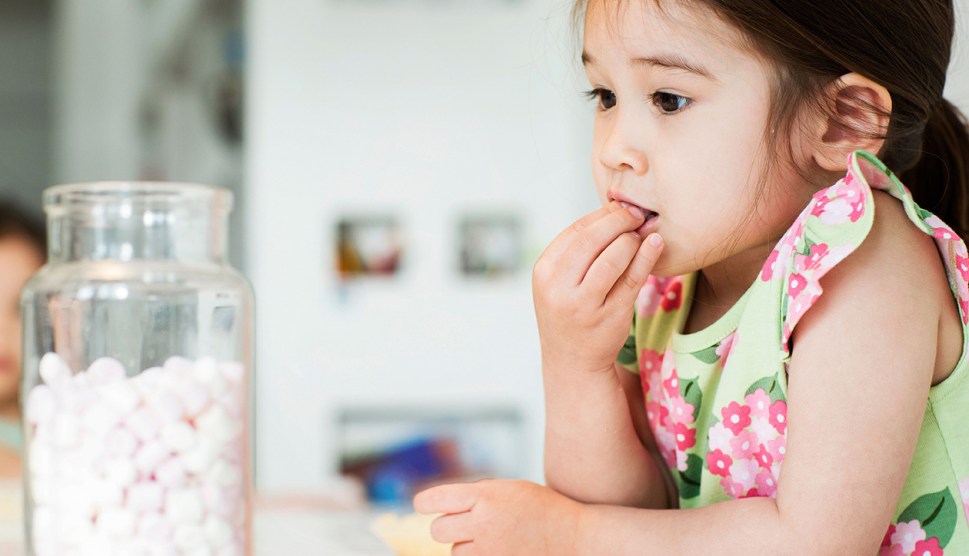 Will this little girl's love of marshmallows doom her to failure later in life?Image Source/ZUMAPRESS

You know all about the marshmallow test, don’t you? A researcher shows kids a marshmallow and tells them they can eat it now, or, if they wait a bit, they can have two marshmallows. If the kid waits, it shows excellent self-discipline and the ability to delay gratitude, which helps in later life.

There’s only one problem: the studies demonstrating this are kind of crappy: small sample sizes, upper middle class kids, etc. Recently, though, a professor at NYU came across an old NIH study that administered the marshmallow test to a thousand diverse 4-year-olds. When the kids were recontacted at age 15, the results were dismal: there was hardly any correlation at all between doing well on the marshmallow test and doing well later in life. But over at Vox, Brian Resnick tells us there was this:

His paper also found something that they still can’t make sense of. Most of the predictive power of the marshmallow test can be accounted for kids waiting just making it 20 seconds before they decide to eat the treat. “So being able to wait for two minutes, five minutes, or seven minutes, 2 min, 5 min, or 7 min, the max, it didn’t really have any additional benefits over being able to wait for 20 seconds.”

That makes it hard to imagine the kids are engaging in some sort of complex cognitive trick to stay patient, and that patient. It makes it hard to imagine the test is revealing something deep and lasting about their potential in life. And perhaps it’s an indication that the marshmallow experiment test is not a great test of delay of gratification or some other underlying measure of self-control.

I disagree! First of all, 20 seconds is a long time for a four-year-old. What’s more, those first 20 seconds are the most important. When it comes to emotional control, the biggest difference is not between the person who waits a few minutes to make a decision vs. the person who sleeps on it overnight. The biggest difference is between either of them and the person who’s always popping off instantly over something. That could be something as small as an impulse purchase or as large as getting into a bar fight over an imagined slight. In either case, if you make the effort to think for even a few seconds, you’re miles ahead.

That said, I doubt the marshmallow test really tells us much. But if it tells us anything, it’s probably about the value of not being a hothead.