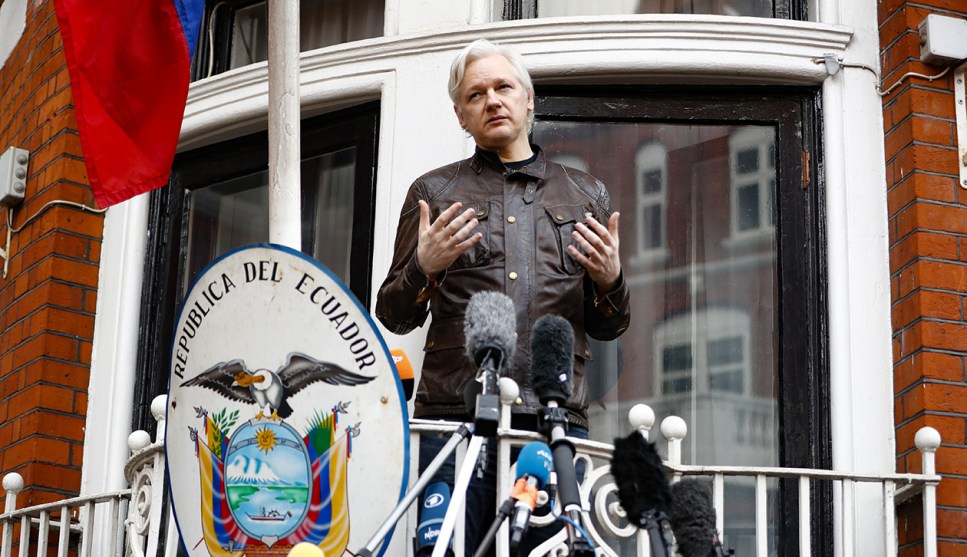 Ecuador’s President Lenin Moreno traveled to London on Friday for the ostensible purpose of speaking at the 2018 Global Disabilities Summit (Moreno has been confined to a wheelchair since being shot in a 1998 robbery attempt). The concealed, actual purpose of the President’s trip is to meet with British officials to finalize an agreement under which Ecuador will withdraw its asylum protection of Julian Assange, in place since 2012, eject him from the Ecuadorian Embassy in London, and then hand over the WikiLeaks founder to British authorities.

Moreno’s itinerary also notably includes a trip to Madrid, where he will meet with Spanish officials still seething over Assange’s denunciation of human rights abuses perpetrated by Spain’s central government against protesters marching for Catalonia independence. Almost three months ago, Ecuador blocked Assange from accessing the internet, and Assange has not been able to communicate with the outside world ever since. The primary factor in Ecuador’s decision to silence him was Spanish anger over Assange’s tweets about Catalonia.

So denouncing Spain’s leaders was what finally did in Assange? Who could have guessed that? In any case, the Swedish rape charges against Assange were withdrawn a year ago, and skipping bail is a minor offense that Greenwald says would result in either no prison time or perhaps as much as a year or so in prison. The real question is what happens next:

The far more important question that will determine Assange’s future is what the U.S. Government intends to do. The Obama administration was eager to prosecute Assange and WikiLeaks for publishing hundreds of thousands of classified documents, but ultimately concluded that there was no way to do so without either also prosecuting newspapers such as the New York Times and the Guardian which published the same documents….The U.S. Justice Department has never wanted to indict and prosecute anyone for the crime of publishing such material, contenting themselves instead to prosecuting the government sources who leak it.

….But the Trump administration has made clear that they have no such concerns. Quite the contrary: last April, Trump’s then-CIA Director Mike Pompeo, now his Secretary of State, delivered a deranged, rambling, highly threatening broadside against WikiLeaks. Without citing any evidence, Pompeo decreed that WikiLeaks is “a non-state hostile intelligence service often abetted by state actors like Russia,” and thus declared: “we have to recognize that we can no longer allow Assange and his colleagues the latitude to use free speech values against us.”

….Trump’s Attorney General Jeff Sessions has similarly vowed not only to continue and expand the Obama DOJ’s crackdown on sources, but also to consider the prosecution of media outlets that publish classified information. It would be incredibly shrewd for Sessions to lay the foundation for doing so by prosecuting Assange first, safe in the knowledge that journalists themselves — consumed with hatred for Assange due to personal reasons, professional jealousies, and anger over the role they believed he played in 2016 in helping Hillary Clinton lose — would unite behind the Trump DOJ and in support of its efforts to imprison Assange….There seems little question that, as Sessions surely knows, large numbers of U.S. journalists — along with many, perhaps most, Democrats — would actually support the Trump DOJ in prosecuting Assange for publishing documents. After all, the DNC sued WikiLeaks in April for publishing documents — a serious, obvious threat to press freedom — and few objected.

I don’t have any independent knowledge of what will happen to Assange next, or whether he will indeed eventually be extradited to the United States. But I will say this. If the case brought against him is a fairly ordinary one of publishing classified material, I expect, contra Greenwald, that virtually no Democrats and absolutely no journalists will support the government’s case.¹ There would, unfortunately, probably be a few Democratic politicians who would cheer his prosecution, but even there I think (or hope, anyway) that their numbers would be small. If this case goes forward, I suppose it will be a good test of whose level of cynicism is currently best calibrated to the current mood of the American public.

¹The exceptions are likely to be nutballs like Breitbart or folks like that. Even Fox News would probably defend him against a straight-up publishing charge.