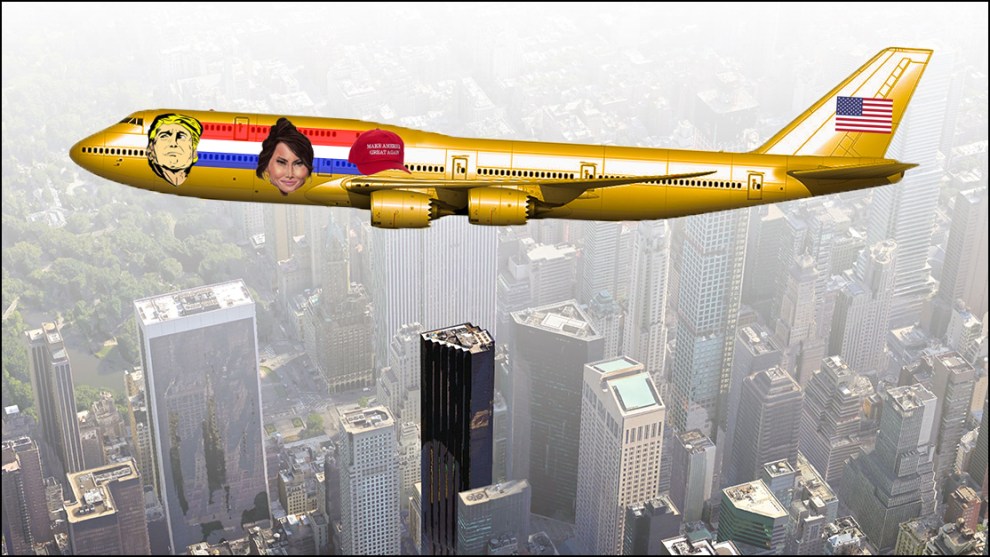 Artist's conception of completed Air Force One based on design guidance and Pantone swatches submitted by commander-in-chief.Courtesy of White House press office

As you probably know, our current pair of Air Force Ones are showing their age and it’s time to build a couple of new ones. But this is an expensive proposition. Sure, the planes themselves only cost about $600 million or so, but then you have to lard them up with top-of-the-line communications, armored windows, a medical suite, missile counterdefenses, an oval office, a situation room, the best avionics available, a presidential stateroom that would make Louis XIV blush, and a few billion dollars worth of other knickknacks.

So what’s the damage? The blue columns in the chart below tell the story. In early 2016, GAO estimated $3.2 billion for the whole program. By the end of 2016, outside analysts figured the cost at more like $3.7 billion. By December 2016, thanks largely to new requirements imposed by the Air Force, Boeing was internally estimating a cost of about $4.4 billion and offered Trump several options to reduce it. He turned them all down. However, in August 2017 Boeing reduced the program cost anyway by offering to use two fully built “boneyard” jets that had never been delivered and were currently sitting in storage. Finally, after eliminating a few small things here and there—airborne refueling, custom furnishings, advanced environmental controls, etc.—in February of this year the Defense Department estimated a finalized cost of about $3.9 billion. Later in the month Boeing confirmed an “informal” deal at that price, and earlier this week the White House announced that the contract had officially been awarded to Boeing for $3.9 billion. The blue bars in the colorful chart below show the whole timeline:

The alert reader will notice two red bars added to the chart. The first comes from early 2017, when Donald Trump suddenly announced that in a mere hour of negotiation at Mar-a-Lago he had shaved $1 billion off the price. Nobody had any idea where this number came from. Then, during this week’s formal announcement, the White House said the $3.9 billion price tag represented a savings of $1.4 billion from Boeing’s original price of $5.3 billion. Once again, no one had any idea where Trump had gotten this number.

If you want the real Air Force One story, here it is: it went through the standard procurement process; briefly got a little pricey in late 2016; stayed pricey because Trump’s Defense Department turned down every proposed cutback; and finally came in under $4 billion thanks to Boeing locating some 747s in storage and then scraping a few dollars here and there from the original spec. Donald Trump played no part in any of this.

The only thing he did was to announce that the cost was too high and that he had personally negotiated it down a billion dollars or more. How did he get away with this? Well, his own Defense Department wasn’t going to contradict him and Boeing didn’t need any grief either, so they just shut up and let him gloat. Over at the White House, Sarah Sanders issued a press release claiming that Trump saved $1.4 billion from the original $5.3 billion contract, and virtually every single major non-specialist news outlet—USA Today, AP, the New York Times, Fox News, the Wall Street Journal, CNN, ABC News, CBS News—just shrugged and ran with it. They were too busy oohing and aahing over Trump’s plan to get rid of Jackie Kennedy’s baby-blue design and replace it with something manlier.

The only major exception was Samantha Masunaga of the Los Angeles Times, who actually picked up her phone and then wrote: “But an aviation analyst has said the new Air Force One planes were always expected to cost about $4 billion. And Defense Department budget estimates for fiscal year 2019 project that the Air Force One program will cost about $3.95 billion through fiscal year 2023.”

This is why it’s so important to assume that everything Trump says is a lie. If he says the sky is blue, check it. If he says he had oatmeal for breakfast, check it. Always remember the Trump motto: