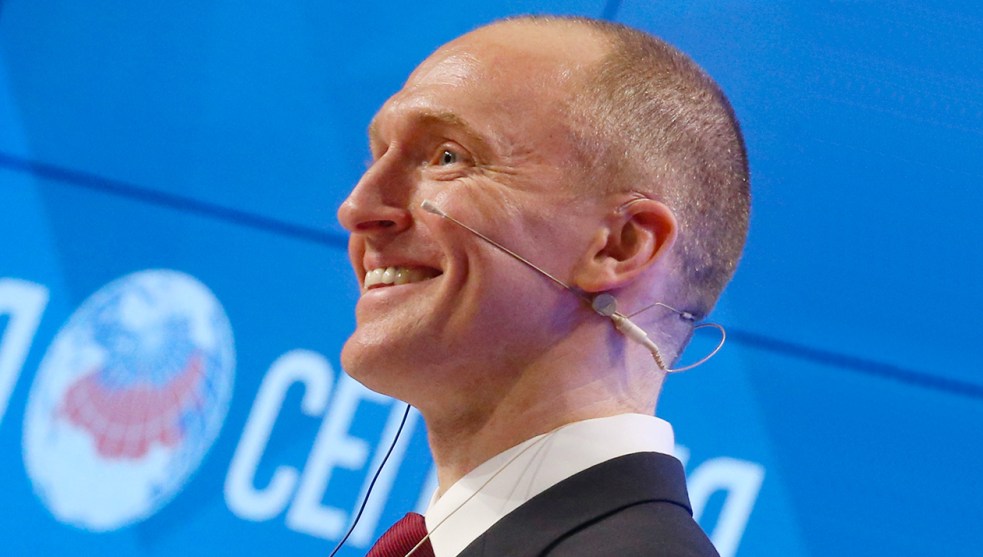 I was busy/sleepy all weekend (they’re sort of the same thing these days) and I didn’t get a chance to dig into the just released FISA surveillance application that the FBI filed in 2016 against Carter Page, the goofball “energy analyst” who worked on the Donald Trump campaign in 2016 and was suspected by the FBI of being a target of Russian recruitment. As you’ll recall, Rep. Devin Nunes theatrically released a memo last February explaining why Republicans were so disturbed about this FISA application—but declined to release the text of the application so that the rest of us could see if Nunes was telling the truth about it. Democrats tried to respond to the Nunes memo, but the White House allowed them to release only a heavily redacted response, and as a result the whole affair was fuzzy enough that lots of people concluded that something funny was probably going on.

Well, thanks to a FOIA request, we can now see the entire FISA application submitted by the FBI. Much of it is redacted, but that turns out not to matter very much. We can fairly easily match up the criticisms in the Nunes memo with the various sections of the application, and make some pretty good guesses about the rest of it. So let’s do that.

The first excerpt is unrelated to the Nunes memo. It’s merely the starting point of the FISA application, stating that the FBI believes Russia is trying to recruit Page in order to influence the outcome of the 2016 election:

Next, Nunes complains that the FISA application mentions George Papadopoulos:

Papadopoulos is yet another sketchy member of Trump’s original foreign policy team, and it was his drunken conversation with the Australian ambassador to Britain in May 2016 that kicked off the FBI investigation in the first place. It’s true that there was apparently no cooperation between Page and Papadopoulos, but so what? He was mentioned solely as another member of the Trump foreign policy team—perhaps to draw the court’s attention to the fact that cooperating with Russia wasn’t unusual for Trump team members—and that was that. There’s no reason there should have been more since the FISA application was for surveillance of Page, not anyone else.

Generally speaking, Nunes is obsessed with the idea that the entire surveillance operation against Page was justified solely by information in the “Steele dossier,” a collection of tittle tattle that he claims was partisan, untrustworthy, and unreliable. What’s more, he claims the court was never advised that the FISA application was largely based on evidence from the Steele dossier:

This is flatly not true. Generally speaking, FISA applications use identifiers (“Source #1,” “Candidate #1,” etc.), and in this application there’s an entire page-long footnote spelling out the details of the information provided by Christopher Steele. A law firm hired Simpson, who hired Steele specifically to perform oppo research on Trump. The FISA court was very much aware of this, and was aware that it was most likely oppo research paid for by Hillary Clinton’s campaign.

Steele had been a reliable source in the past, and here the FBI is explicitly saying that even though this is a partisan investigation, they believe Steele’s reporting to be credible.

This is a reference to an article by Michael Isikoff about Page’s meetings with Russian officials.

Nunes is outraged that the FBI doesn’t mention that Isikoff’s article isn’t independent verification of Page’s activities, but merely the same information recycled by Steele through a different outlet. However, that’s not why the FBI included this information. They included it because it was the Isikoff article that prompted Page to deny that he had met with any Russian officials.

This is key information. Page denied the meetings with Sechin and Divyekin that were part of the Steele dossier. Quite possibly there’s other confirmation in the redacted portions of the FISA application. The fact that Page apparently lied about this is central to the FBI’s desire to surveil him further.

This appears to be a lie. The Steele dossier was important, but McCabe makes it clear that it was less than half the evidence contained in the FISA application. Given the number of redactions in the released FISA application, this is pretty plausible. After all, since the Steele dossier has already been made fully public, there’s little reason to redact anything related to it. The fact that there are so many other redactions suggests that the FISA application contains quite a bit of non-Steele information.

This is true, though the FBI continued to believe Steele’s reporting was basically reliable.

This is also true, though it’s not clear why it’s important. Ohr was an FBI official, and I suppose the implication here is that Fusion GPS, the firm at the center of the Steele dossier, was somehow worming its way into the FBI via Ohr’s wife. Nunes has nothing more to say about this, though. It’s just a petty smear tossed out for no reason.

Generally speaking, Nunes’ contention is that (a) the entire FISA application is based on the Steele dossier, (b) the Steele dossier is a partisan pile of lies, and (c) this goes to show that the FBI had it in for the Trump campaign.

But as we can now see, virtually everything Nunes said is untrue. The FBI investigation originally started in summer 2016, when the Australian ambassador to Britain reported a conversation he had with George Papadopoulos in which Papadopoulos implied that he had Russian dirt on Hillary Clinton. They were further alarmed by the very public attitude of the Trump campaign toward Russia. They had been keeping an eye on Carter Page for years at that point, and the Steele dossier’s claim that Page had spoken with Russian officials alarmed them yet further. Finally, after Page lied about those meetings, the FBI asked the FISA court for a warrant to surveil him.

The warrant was approved by a Republican judge. Not then, and at no time since, has she suggested she was duped. Ditto for the judges who signed the subsequent extensions, all of them Republicans. Finally, the sheer volume of redacted material—which grew larger in each application for extension—strongly suggests that the FBI had quite a bit of material well beyond just the Steele dossier.

Finally, it’s worth keeping in mind that the standard for a FISA warrant is “probable cause” that the target is an “agent of a foreign power.” This is not a negligible standard, but neither does it require bulletproof evidence. In this case we have Page’s known travels; his meetings with Russian officials; his own admission that he was an “informal adviser” to the Kremlin; his lie about his meetings with Sechin and Divyekin; and the contents of the Steele dossier. Plus, of course, whatever else is hiding under all those redactions. In the real world, that’s way more than enough to get approval for a surveillance warrant.

Bottom line: Devin Nunes, unsurprisingly, has lied about virtually everything he said. The Carter Page warrant was perfectly ordinary and the FBI showed no particular bias in applying for it. Nor did the judge show any bias in approving it. It was all pretty routine, and the only unusual thing about it is that presidential candidates usually don’t hire multiple advisers with unexplained connections to Russian officialdom. But Donald Trump did.