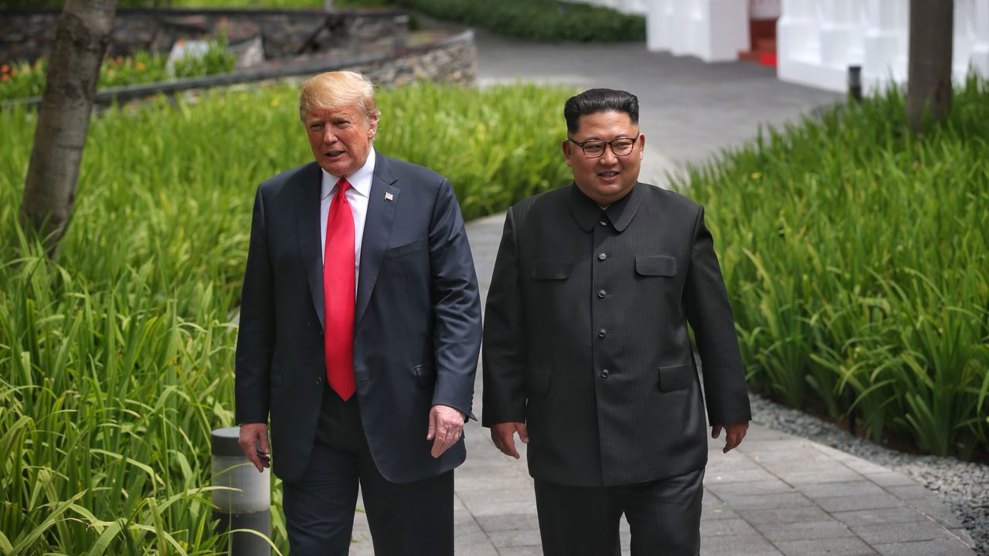 This story hasn’t been retracted since it ran yesterday, so….

President Donald Trump told North Korean leader Kim Jong Un during their Singapore summit in June that he’d sign a declaration to end the Korean War soon after their meeting, according to multiple sources familiar with the negotiations. But since then, the Trump administration has repeatedly asked Pyongyang to dismantle most of its nuclear arsenal first, before signing such a document.

….Here’s the background: North Korea invaded South Korea in 1950, which started the war….Fighting ceased in 1953, but the warring parties only signed an armistice — a truce — which means the war technically continues to this day….This is one major reason North Korea has oriented its foreign policy around how to deter a future attack by the United States and South Korea, mostly by developing a strong nuclear program that includes around 65 nuclear warheads and missiles that can reach all parts of the US mainland.

But during a New Year’s Day address, Kim noted that he wanted to focus more on improving his country’s economy, which is one of the world’s poorest. To do so, experts tell me, Kim needs a peace declaration to end the Korean War. This would provide political cover for him to denuclearize part — or, less likely, all — of his arsenal.

….It seems like Kim took Trump at his word in Singapore. And in the agreement Kim and Trump signed after their summit, two items about establishing peace between the two countries came before a denuclearization commitment, which helps explain why North Korea thinks a peace declaration should come before nuclear concessions. But Secretary of State Mike Pompeo has repeatedly asked Pyongyang to hand over 60 to 70 percent of its nuclear warheads within six to eight months. That pressure angered Kim, a source told me, since the North Korean leader believes he was promised that a signed declaration would come before any nuclear concessions — which may be the reason statements from Pyongyang about nuclear talks have turned increasingly antagonistic.

It’s easy to believe this is true, and it’s pretty nuts. There’s nothing wrong with signing a formal end to the Korean War, of course, but this is something Kim wants. Just like a formal meeting with the American president was something Kim wanted. The idea that the US should give Kim a couple of freebies before he does anything of substance is monumentally naive considering North Korea’s past behavior.

Then again, if Trump really did promise this and then reneged, it would appear to Kim that the United States was once again reverting to its past behavior: making promises and then breaking them at the slightest justification. For example, after the 1994 Agreed Framework was signed, the US routinely missed shipments of heavy oil; failed to build the two light-water reactors it had promised; and refused to remove North Korea from its list of state-sponsored terrorism.

This history convinced Kim that the United States was not a trustworthy negotiating partner. So if it’s happened again, it’s small wonder that Kim is acting badly. It all depends on what Trump really promised Kim, and there’s no formal or informal record of that since Trump doesn’t believe in such things. But it certainly wouldn’t surprise me if Trump cavalierly offered a final peace treaty—which Kim took very seriously—and then got talked out of it by his advisers when he got home. If that’s the case, it explains a lot.