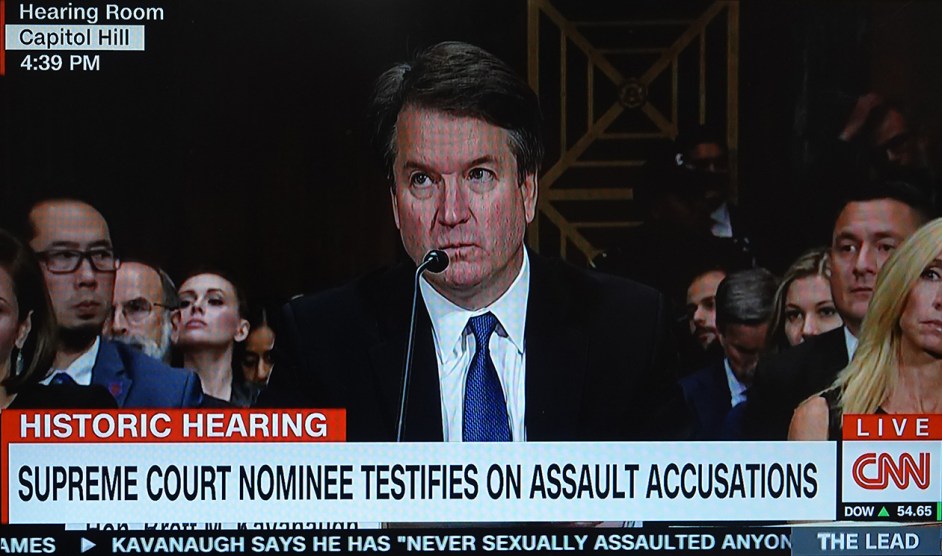 Isn’t this over yet? I guess not. Let me tell you, this was not how I was planning to spend my day. I figured I’d have the hearing on in the background while I mostly blogged about other stuff. That plan lasted about five minutes.

5:30 — OK, we’re starting up again. Kavanaugh is apologizing to Amy Klobuchar for his glib behavior toward the end of her questioning. The apology is accepted.

5:40 — Chris Coons is asking again about why the hearing shouldn’t be delayed to allow an FBI investigation. Kavanaugh, as usual, simply refuses to answer.

5:42 — Now Kavanaugh is whining. Coons wants to delay for a week, but Kavanaugh, almost through tears, asks Coons if he knows how long the past ten days have been. “Every day has been a lifetime,” he says. Please. Judges and prosecutors put people through this kind of thing all the time.

Again, the GOP held the Scalia seat vacant for over a year. Now a week is an unacceptable delay.

None of this is remotely on the level.

5:48 — Mike Lee is picking up on Chuck Grassley’s weird rant about how the FBI doesn’t come to conclusions. I have no idea what point they think they’re making with this. The FBI would presumably interview people under penalty of perjury and then produce a bunch of new facts. Or not. Either way, that would help the committee come to conclusions. Everyone knows this.

5:55 — Ah. Richard Blumenthal finally brings up Kavanaugh’s claim that this entire affair is driven by revenge from the Clintons and funded by shadowy left-wing organizations. Personally, I’d like to hear a lot more about that, but Kavanaugh failed to respond in any meaningful way. In the end, I guess, it always comes back to the Clintons, doesn’t it?

6:15 — Mazie Hirono pressing Kavanaugh hard on whether he was a heavy drinker in high school and college. It’s pretty obvious he was, like lots of other college kids. But Kavanaugh just won’t admit to it and has once again filibustered without having to answer any of Hirono’s questions.

I like how they just got rid of Rachel Mitchell asking questions. No one has said a thing, she’s just disappeared.

This is normal. Everything is fine.

6:20 — Thom Tillis insists that the Judiciary Committee is conducting a rigorous investigation. I’ll believe that right after they have a long conversation—under oath—with Mark Judge.

6:25 — Oh no. Not Ted Cruz. Even Ashley Kavanaugh looks like she wishes Cruz would just shut up.

6:30 — Dianne Feinstein has finally had enough. She’s explaining the obvious: she kept Ford’s letter confidential because Ford asked her too, not because she wanted to spring it at the last second. So how did the letter become public? Cornyn asks Feinstein if anyone on her staff leaked Ford’s letter. Feinstein says no. Somehow I can just smell that this is going to end up with an FBI investigation after all—except that it’s going to be an FBI investigation into Feinstein’s office.

6:37 — Feinstein thinks that Ford’s allegations leaked before her letter was published in the Intercept. She also says she doesn’t think the letter itself was ever leaked. It is not clear to me what this means.

6:40 — Kamala Harris asks repeatedly: “Are you willing to ask the White House to authorize an FBI investigation?” Kavanaugh refuses to answer.

6:44 — Hearing adjourned. Praise the Lord. Our next order of business is to pretend to discuss whether to hold a vote tomorrow.