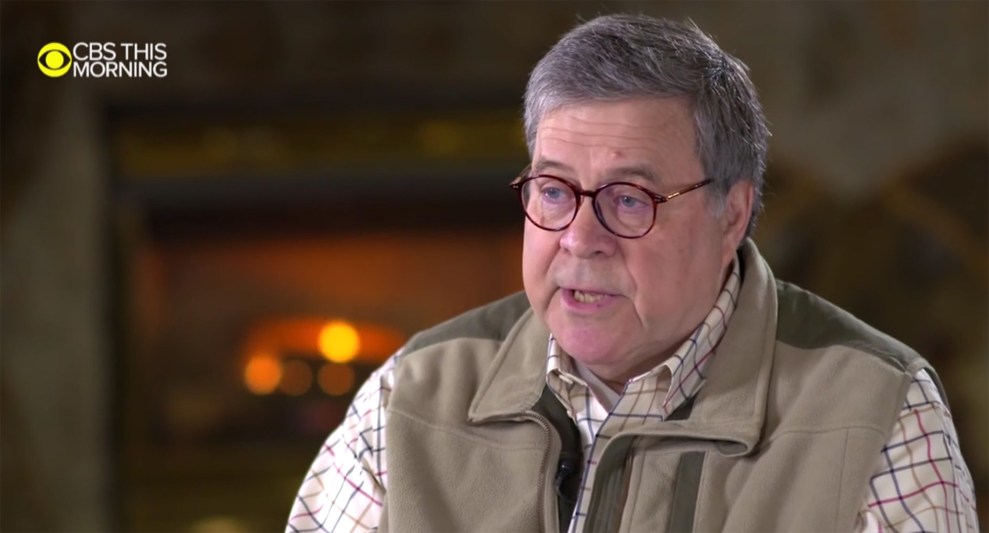 Attorney General William Barr sat down yesterday with Jan Crawford of CBS News to talk about the Mueller investigation. As you know, President Trump has claimed that the Obama administration “spied” on him during the 2016 campaign, and Barr himself has also used that word. Crawford asked him about that:

CRAWFORD: You’ve gotten some criticism for using that word.

BARR: Yeah, I mean, I guess it’s become a dirty word somehow….It’s part of the craziness of the modern day that if a president uses a word, then all of a sudden it becomes off bounds. It’s a perfectly good English word, I will continue to use it.

CRAWFORD: You’re saying that spying occurred. There’s not anything necessarily wrong with that.

Poor Bill Barr. He just doesn’t understand why spying has suddenly gotten a negative connotation that it never had before Trump mentioned it. Prior to 2017, it was just an ordinary, nonjudgmental English word that everyone used for any kind of police investigation. But these are hyperpartisan times, so what can you do?

Following this linguistic flim-flam, Barr explains that he wants to investigate this spying because he came of age during the 60s and is really, really sensitive to the possibility of the FBI violating someone’s civil liberties. Yes, we’re talking about the same Bill Barr who approved this. Seriously:

BARR: The fact that today people just seem to brush aside the idea that it is okay to you know, to engage in these activities against a political campaign is stunning to me especially when the media doesn’t seem to think that it’s worth looking into. They’re supposed to be the watchdogs of, you know, our civil liberties.

BARR: Well, I’ll say at this point is that it, you know, I, like many other people who are familiar with intelligence activities, I had a lot of questions about what was going on. I assumed I’d get answers when I went in and I have not gotten answers that are well satisfactory, and in fact probably have more questions, and that some of the facts that I’ve learned don’t hang together with the official explanations of what happened.

CRAWFORD: What do you mean by that?

BARR: That’s all I really will say. Things are just not jiving….

Barr has seen things. He can’t tell us what they are, but they’re worrying, very worrying. For example, there are those texts between the two FBI lovebirds that Trump keeps tweeting about, which all of us have seen and pretty much dismissed:

BARR: It’s hard to read some of the texts with and not feel that there was gross bias at work and they’re appalling. And if the shoe were on the other—

BARR: Those were appalling.

Appalling! And just in case you were not as appalled by those texts as Fox News was, Barr has some more shocking news for us:

BARR: From my perspective the idea of resisting a democratically elected president and basically throwing everything at him and you know, really changing the norms on the grounds that we have to stop this president, that is where the shredding of our norms and our institutions is occurring.

CRAWFORD: And you think that happened even with the investigation into the campaign, potentially?

BARR: I am concerned about that.