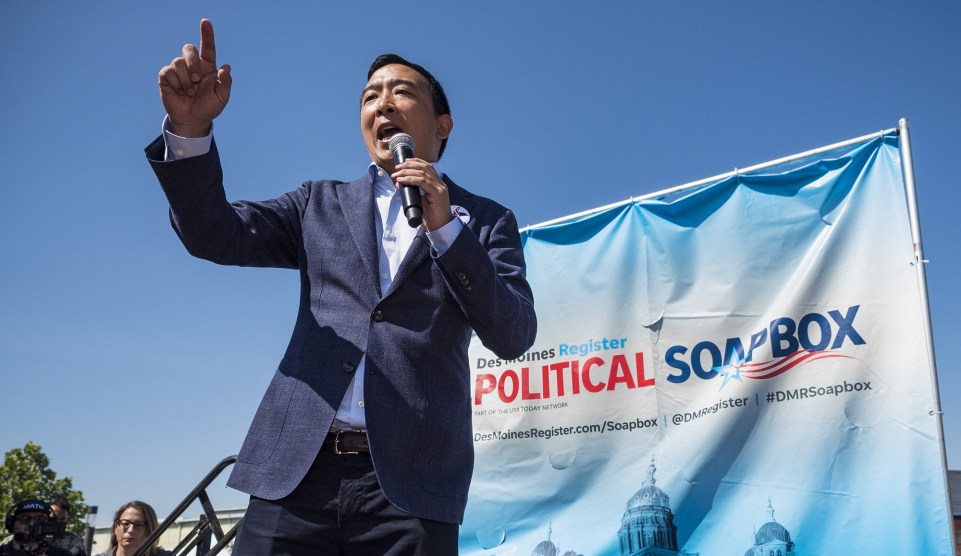 When I evaluated the climate plans of the top Democratic candidates, I didn’t include Andrew Yang because he wasn’t really a top candidate. But he’s an interesting candidate, and several people have asked what I think of his plan. So let’s take a look.

In terms of spending, he’s proposing $4.9 trillion. However, $400 billion of that is “Democracy Dollars,” which is unrelated to climate change. That gets us to $4.5 trillion, but this is over 20 years, so you need to cut all of Yang’s numbers in half to get a ten-year figure comparable to the other candidates. This gets us to about $2.2 trillion over ten years, slightly larger than Joe Biden and Elizabeth Warren. Based on this number, here are some of the details:

I’m less enamored with his carbon tax and dividend proposal. It’s true that the regressive nature of a carbon tax is a problem, but simply returning the money to low-income families means the carbon tax will probably have little value in reducing carbon emissions. This is the worst of all worlds: a carbon tax that will generate public opposition but not really accomplish much.

I’m not excited about the huge loan program for household investments. This is something that I need to look into further, but I’m not sure that residential solar provides the biggest renewable bang for the buck.

Yang also goes out of his way to allocate specific amounts for a large variety of programs. This probably doesn’t matter that much, but it still sets a bad example. Yang shouldn’t pretend that he knows down to the dollar how much we should spend on every little thing.

Finally, as you all know, I judge climate plans largely on how much they dedicate to R&D. Yang never says directly how much R&D spending he supports, but it’s possible to subtract from his topline number all the spending that definitely isn’t R&D. By my rough accounting, this leaves about $250 billion max for R&D over the next ten years. This is a pretty small number.

Yang also barely even mentions the global nature of global warming. Even if the United States gets to net zero carbon emissions, what are we going to do to spur the rest of the world to follow? Yang has a sentence or two about this, but that’s all.

Put all this together, and by my admittedly idiosyncratic standards Yang’s plan isn’t especially impressive. I’d give it a C-.