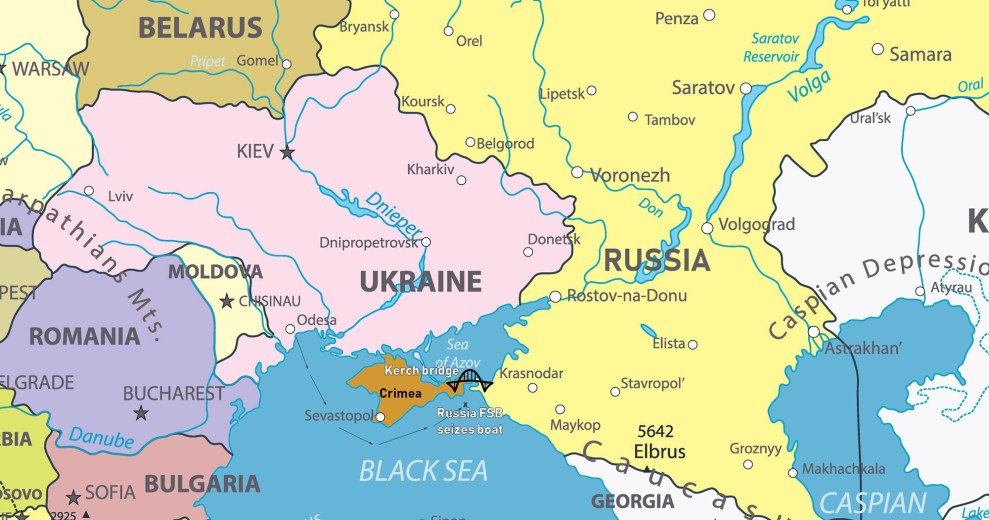 Ukraine is the big pink country on this map. This is what the articles of impeachment are about.

Here’s a timeline of the Ukrainegate affair. It is not exhaustive—not even close. There’s a reason for this, but first let’s refresh everyone’s memories:

Late 2018: Rudy Giuliani talks on the phone with Victor Shokin, the former prosecutor general of Ukraine, who was fired in 2016 because he was so deeply corrupt. Giuliani tells Shokin he’s looking for two things: an investigation into the DNC server hack, which is part of a lunatic right-wing conspiracy theory; and dirt on Hunter Biden and Burisma.

April 21: Volodymyr Zelensky is elected the new president of Ukraine.

May 1: The New York Times reports that Giuliani has discussed the Bidens with Ukrainian prosecutors several times. Giuliani acknowledges that he has kept President Trump abreast of these conversations.

May 9: Giuliani sets up a trip to Kiev to discuss the Bidens. After his plans become public, Giuliani cancels the trip and reschedules it for Spain. In an interview a few months later, Giuliani at first denies that he asked anyone to investigate Joe Biden, but then turns around and says, “Of course I did!”

May 20: Marie Yovanovitch, the US ambassador to Ukraine, is recalled because she is seen as a roadblock in the way of getting Ukraine to reopen the Biden investigation.

Mid July: Trump holds up a military aid package to Ukraine that has already been approved by Congress. He instructs his chief of staff, Mick Mulvaney, to lie to Congress about the reason for the holdup.

Mid July: A flurry of text messages are exchanged between three men: William Taylor, the new ambassador to Ukraine; Gordon Sondland, a Trump donor who was named ambassador to the EU; and Kurt Volker, a special envoy to Ukraine. Taylor concludes the conversation by saying, “I think it’s crazy to withhold security assistance for help with a political campaign.” In testimony before Congress, he confirms that this was the clear subject of the conversation. In addition to the military aid, the three had also discussed holding up a visit by Zelensky to the White House.

July 25: Trump talks on the phone with the President Zelensky of Ukraine. After Zelensky says that Ukraine is ready to receive the military aid package, Trump responds, “I would like you to do us a favor, though.” There are two parts to the favor: investigating the DNC server hack and investigating the Bidens.

July 29: Attorney General William Barr meets with UK intelligence officials about the origins of the Russia collusion investigation. The goal is to cast doubt on the entire Ukrainegate affair by showing that it was an outgrowth of the Russia investigation, which Barr thinks was itself the result of a criminal conspiracy against Trump.

Early August: The Ukrainians, who have mostly been confused up until now, finally figure out that Trump is withholding the military aid package until they re-open the investigation of the Bidens.

October 17: Mick Mulvaney admits at a press conference that the Ukraine aid was held up because Trump wanted Ukraine to investigate the DNC server hack.

October 23: Ambassador Taylor testifies that President Trump told Gordon Sondland that military aid would be at a “stalemate” unless Zelensky played ball. Trump insisted that Zelensky “go to a microphone and say he is opening investigations of Biden and 2016 interference.”

My point here is not to recap every detail of how Ukrainegate has played out. My point is to show that this was no spur-of-the-moment outburst from President Trump. He’s clearly been obsessed by it for nearly a year, and he’s involved a wide cast of characters: Giulani, Taylor, Sondland, Volker, Mulvaney, Barr, Yovanovitch, Shulkin, Lutsenko, and a number of others.

This is what makes Ukrainegate such a big deal. It would be bad enough if it were just a typical Trump outburst, soon forgotten by all involved. But it wasn’t: it’s been a wide-ranging, year-long effort to extort a foreign country to smear a political opponent. If that’s not impeachable, nothing is.