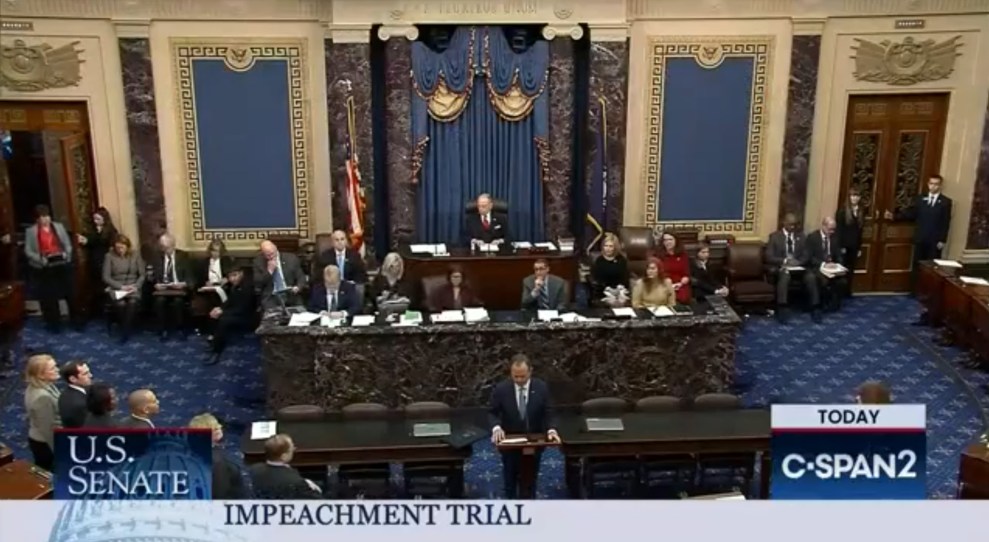 Mitch McConnell has set out the ground rules for the impeachment trial of President Trump:

McConnell’s organizing resolution, which he circulated late Monday afternoon, offers each side 24 hours to make their opening arguments starting on Wednesday but compressed into two session days. It is unclear whether Democrats would press to use all their time, which could push testimony past midnight.

After the House managers and Trump’s lawyers make their case, senators will be allowed 16 hours to question the opposing sides.

After that, the sides will debate for a maximum of four hours on whether to consider subpoenaing witnesses or documents at all, followed by a vote on whether to do so.

….The Senate trial also won’t automatically admit evidence from the House process, according to GOP officials, a key difference from the impeachment trial of President Bill Clinton more than two decades ago. Though the material will be printed and made available to senators, it won’t be automatically admissible unless a majority of senators approve it.

McConnell is obviously trying to get this over with quickly, and he’s also trying to bore people to death by forcing Democrats to hold the floor for hours on end. Hopefully Democrats are smart enough not to take the bait. These opening arguments, after all, aren’t aimed at senators, most of whom already know how they’re going to vote. They’re aimed at the public, and that means they need to be short, pointed, and simple. If Democrats can’t actually convict Trump, they can at least use the impeachment trial to introduce the American public to the highlights of what Trump did.

(The Trump side is already well aware of this. As the Post article says, their defense brief is “a legalese version of the scorched-earth rhetoric commonly used in the president’s Twitter feed.” That’s for the benefit of Fox News and talk radio, not the Senate floor.)

The only real question mark in this whole affair is whether the Senate will vote to call witnesses. My guess, as usual, is that McConnell will hold his caucus together and vote down a motion to subpoena witnesses, but you never know. All it takes is three or four defectors.

Anyway, it looks like things will start Wednesday and probably end sometime next week.